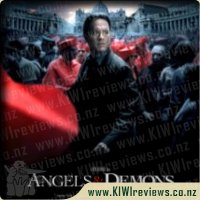 In Ron Howard's thrilling follow-up to The Da Vinci Code, expert symbologist Robert Langdon (Tom Hanks) follows ancient clues on a heart-racing hunt through Rome to find the four Cardinals kidnapped by the deadly secret society, the Illuminati. With the Cardinals' lives on the line, and the Camerlengo (Ewan McGregor) desperate for help, Langdon embarks on a non-stop, action-packed race through sealed crypts, dangerous catacombs, and the most secretive vault on Earth! I am one of those surprising few people these days that managed to avoid the whole 'Da Vinci Code' and 'Angels & Demons' hype when the books became the "in-thing" to read. Even when the books were turned into movies I managed to get by without seeing either of them. To be honest I didn't even know that the second one had been made into a movie. But it was on TV, and my flatmate assured me that this film worked as a standalone film that didn't require seeing the 'Da Vinci Code' prior, to understand.

The first portion of the film set the story in motion, filling in enough of the back-story that is necessary to understand and enjoy the film. As soon as 'conspiracies' and 'Illuminati' were mentioned, I was intrigued, and my brain started ticking over, trying to collect as much information as I could to try solve the mystery before the end.

Of course the film is set about quite simply and is very similar to the "National Treasure" franchise, so the clues are pretty much instantly solved for you,but it still was good to be able to see the convolution made transparent as the film progressed.

Tom Hanks did a great job as the less adventurous Indiana Jones, the symbologist that runs away from guns and confrontation. It makes for a more believable story, providing meanings and explanations for many of the buildings that are real places that can be visited today. Not relying on fabricated and mythical relics. Ayelet Zurer's character (Vittoria Vetra) was largely disappointing. While I was assured that she held an integral part in the book, her part in the film was largely unnecessary and she could have been stripped from the movie entirely with very minor changes to the script.

This film flowed well. It accelerated from one puzzle to the next, with constant action and second guessing. Even what looks like the end of the film turns out to not be the end. The casting of the true villain made it rather easy to predict the outcome, which was unfortunate, but it kept my interest, and I would certainly not have an issue re-watching the film at a later time.

Having really enjoyed The DaVinci Code, I was excited to hear that Angels & Demons was coming out, and then to add to that, Ron Howard (who at the time said he didn't like to do sequels) had signed up to direct this one as well. This time the Illuminati have apparently kidnapped the four cardinals who are up for election to be the new pope. It's up to Langdon to help the church solve the puzzles and find them before it's too late.

I really liked this as there was the question about why the Illuminati were back, did someone murder the Pope and if so, who? It kept me on my toes and when they unveiled who the person behind it all really was it was a complete surprise to us all. The writing was done really well and I thoroughly enjoyed the film.

Have to mention special effects as there is a scene or two right at the end which are quite a sight to see. I can't go into detail without giving away spoilers, but one of the end parts are really fabulous and I would have loved to have seen it on the big screen.

If you enjoyed The Da Vinci Code book then this is a must see.

A compelling psychological thriller, Berlin Syndrome follows Clare, an Australian photojournalist alone and adrift in Berlin. One afternoon she meets Andi, a charismatic local. There is an instant attraction between them and a night of passion follows. But what initially appears to be the start of a romance take a sinister turn when Clare wakes up the following morning to discover Andi has left for work and locked her in his apartment. An easy ... more...