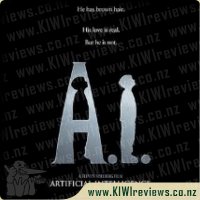 Based on the 1969 short story Super-Toys Last All Summer Long, by Brian Aldiss, this science fiction fantasy bears similarities to Pinocchio (1940) and originated as a long-gestating project of director Stanley Kubrick that passed to his friend Steven Spielberg after Kubrick's death.

Haley Joel Osment stars as David, a "mecha" or robot of the future, when the polar ice caps have melted and submerged many coastal cities, causing worldwide starvation and human dependence upon robotic assistance. The first mecha designed to experience love, David is the "son" of Henry (Sam Robards), an employee of the company that built the boy, and the grief-stricken Monica (Frances O'Connor).

A.I. Artificial Intelligence is very much the story you would get if you took the tale of Pinocchio, placed him into the future and made him a robot instead of a puppet. It's set in the future, something that can make a film quite fascinating, seeing someone's vision of our worlds future.

Hayley Joel Osment stars as David, a robot created to replace his parents human son who is in a coma, he is also the first of his kind to love. However when their son wakes and returns home, David is eventually abandoned and so he goes on a hunt to find the Blue Fairy to make him a real boy. He meets an array of characters on his way to trying to become human.

I rather liked this twist on the Pinocchio tale and despite the fact that this had two different directors (one died during the making of this film) it still turned out pretty well. It's a touching story and I found myself really hoping that David would find a loving family in the end. Whilst I don't think it is a ground breaking film in any way, it is still a well made and acted film.

Even if you only watch this once, it is a good film and a great twist on a timeless classic, you'll find yourself hoping that he finds his Blue Fairy.

A.I. was a big hype movie of it's time. It started out under the watchful directorship of Stanley Kubrick. However, when Kubrick died, rather than let the film gather dust, they brought in Spielberg to finish the film. I love both of these directors, but they both have very different styles. As a result, even the movie trailers that were released for this film (two different ones) were in stark contrast with each other.

Was this going to be a family friendly sci fi tale? or was it going to be a heart wrenching epic that would make you question humanity at it's core? Well, the answer to that question is kinda both. This film certainly made me think more about the future. What we might strive to achieve with robotics. What good and what bad might come from that.

I felt a range of emotions for David, the main character. His journey is so full of rejection. Yet, there is something magical in it as well. They don't even attempt to hide the Pinocchio thread. The humans in this film are cruel and heartless compared to the robots. Many of the scenes left me in tears. However, as beautiful as this was I couldn't help feel like it could have been shorter. There are several points in the film where you think "it could finish now and I'd be satisfied". Apart from that, and the disjointed-ness it's a solid film.

At the tender age of 13, Henry Wheeler (Gattlin Griffith) grapples with the pains of adolescence while caring for his troubled, reclusive mother, Adele (Kate Winslet).

One day while shopping for school supplies, Henry and Adele encounter Frank Chambers (Josh Brolin), an intimidating man but one who clearly needs their help. Frank convinces the two of them to take him into their home, but later it becomes clear that he is a convict who has escaped.

Based on the novel by Joyce Maynard.