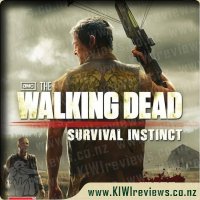 The Walking Dead brings the authentic, heart-stopping horrors of The Walking Dead to life in a way that's unlike anything the series has ever seen. Terminal Reality's upcoming video game is an all-new, first-person, do-whatever-you-need-to-survive game based on AMC's Emmy award-winning series. In the game, players assume the role of the mysterious, crossbow-wielding survivor Daryl Dixon, alongside his overbearing brother Merle, on a haunting, unforgiving quest to make their way to the supposed safety of Atlanta.

Features:
•  An engrossing single player campaign that lets players experience the world of The Walking Dead through the eyes of fan-favorite, Daryl Dixon.
•  A unique style of game play that blends first-person action with resource management for a focus on surviving the undead nightmare.
•  Authentic character design and frighteningly realistic animations. Walkers look, move and react to sights, sounds and smells just the way that they do in the hit television show.
•  An emphasis on survival - every threat needs to be assessed and every situation analyzed. Players will choose whether to stay and fight while risking a gruesome death or using stealth to avoid the undead. Resources are scarce and scattered; gamers will have to not only ration supplies, but carefully consider their food, medical needs, ammunition, and other goods as survival in the game is based upon wit and intellect more so than simple, sheer skill.
•  Decisions matter as Daryl will encounter a slew of characters that can help or hurt him in a variety of ways; whether or not they accompany him is completely up to the player and represents just some of the major decisions that will constantly be made.
•  Terminal Reality's using their proprietary Infernal Engine and wealth of experience to create an amazing experience for both fans and newcomers alike.

My husband was looking forward to this game as not only was it a shoot em up kind of game, but it is also based upon The Walking Dead TV series. So, with great anticipation he put this on and settled down to give it a good run for it's money.

You play Daryl Dixon (a key character in the TV series) who is first trying to find his brother, and when reunited, find a safe haven to escape the zombies. You do get to make some choices, such as when travelling you can decide which route to choose by deciding if you want to be safer, gain more supplies or have your petrol last longer.

A lot of this is shoot em up, zombies galore attack and whilst this was fun at first it became a bit too repetitive. The game didn't really offer up much despite all of it's promise and what many had hoped it would deliver. There's nothing special about this and about the only thing you want to keep an eye out for (if you make it that far) is a link to the first season of The Walking Dead.

Not too bad a game, but a big let down from what he expected.

You build the game! Assembly is only half the fun as you build your game, Space Boot and Trap. Then, chase down the cheese. Don't get trapped as you search for the cheese in outer space. Collect 10 cheese bricks to win. Play it our way, or change things up! Find ALL of the cheese, customize the gameboard, add in some twists, and make it your ... more...