The Karazan Quartet : 3 : Prince of the Wind review 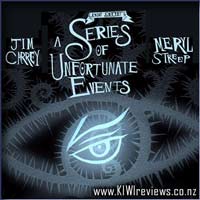 A Series of Unfortunate Events, narrated by Lemony Snicket, focuses on three orphans, Klaus the reader, Violet the inventor, and Sunny the biter, who are taken in by a relative Count Olaf, who has plans for the kids, and their inheritance.

Lemony Snicket's A series of Unfortunate Events is one of those movies that the titles suggests you will either love it, hate it, not understand it, or not really know how you feel about it. Me - I do not really know what I truly thought about it. I expected something amazing I think, just because the cast included such huge names; Jim Carrey (everyone knows he is a complete funny guy), Billy Connolly (my all time absolute favourite comedian ever), Jude Law (one of the best actors out) and Meryl Streep (a name most households know). However it was not amazing. Confusing maybe, random even, but definitely not amazing.

Do not get me wrong, there was some really great moments in the movie, probably all those that had Billie in them lol and my kids actually enjoyed it and thought it was great, to the point where they even hired it out again from the video store. But all in all it was pretty random.

Ya got the gist of the story line, but it was just weird. It is loosely based on the first three volumes of the best-selling series of books for intermediate readers, and is about three children (The Baudelaires) who soon become orphans. The events that follow really are a series of unfortunate events.

This is one of those movies that will not be suited to everyone, and one you would need to see yourself to make up your own mind.

This was another movie that I went to with my mother when it came out. We had seen the trailers and thought like it looked like a fun little film. I had read the first book as it was hugely popular, and since I worked at the school library and saw it nearly everyday, I thought I should read it. I found the book to be awful and almost mocking me, so had high hopes for the movie.

The start had me genuinely confused, it starts off with a happy elf singing and dancing, and then it tells you that if you want to see a happy movie you had best go to see another film.

While I enjoyed the first viewing of it, it wasn't something I was aiming at owning, but I do, simply because it was a twin pack and cheaper to buy than the one I wanted on its own. I have watched this 3 times since owning it, and it's never gotten any better on repeat viewing. Jim Carrey was too much of the same throughout the movie. The only good acting in the movie was the children.

This isn't a movie I would recommend, if it's on TV, sure, watch it, but otherwise I wouldn't go out of my way to watch it.

I went to see Lemony Snicket's A Series of Unfortunate Events when it first came to the big screen. It was released at the same time as Harry Potter was making a name for itself as a cinematic story. Yet another fantasy based kid's book being converted to movie format. I thought why not give it a go.

Why not? Aside from the delightful Billy Connolly, giving his usual well timed comedic performance, there is no reason to see this film. A tad harsh, but honestly I was not impressed. The plot was so chopped up, it didn't make a lot of sense. I do wish I had read the books. I get the impression they might have made more sense - sometimes movie making leads to cuts to the plot for time reasons.

Jim Carrey is a huge reason not to see this film. I'm often appalled that they refer to him as this talented rubber faced man. He has one face, one look, and one act. Jack Black could act him under the table. This film showcases Carrey's ability to be himself in a different costume.

I wanted so much to like this film, but I just couldn't. If you are thinking of getting a fantasy movie out based on a book, go with Harry Potter or even the Spiderwick Chronicles. They'll be far better value.

I had a vague idea that I had heard of the books this movie was based on, but that was about it, just a hint that they existed out there somewhere. So I felt safe about seeing this one and assessing it on it's own merits.

Here are my personal highlights from the movie: a) Billy Connolly making an appearance as an eccentric snake expert, and b) the "W. Heath Robinson" meets "Nightmare Before Christmas" kind of science. Huge list. On the other side of the coin, the lowlights were just as few: a) Jim Carrey doing another typical rendition of, well Jim Carrey, and b) the rest of the movie.

With a very mediocre plot, bad acting from even the famous faces, and a very disconnected, highly improbable set of 'events' tied together by the most tenuous of threads... I was frankly bored! The most entertaining bit was overhearing some woman a couple of seats back filling her friends in on the the books. She made a very interesting comment about how the movie filled in some extra details of the characters... so perhaps that was why I found it to be a dud.

Overall, not really impressed. If the books are anything like the movie, they won't find a place in my reading list either. If you enjoyed Nightmare Before Christmas, you might find this to be akin enough to warrant a try. Otherwise, well, I won't be seeing this again any time soon I think.

Well, I would have to agree with the previous reviewer. I found the storyline to be particularly outrageous in some places and the acting - especially from Jim Carrey - was appalling.

I went into this movie not knowing a thing about any books or the story therein, and found that the movie made me wonder if I even want to seek out the books to read them. After much thought, I have come to the final answer - a resounding 'Not a smegging chance'.

Overall, not impressed at all. Not gonna add this to the collection.