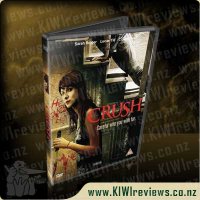 Scott has it all; good looks, popularity... and a secret admirer.

But what starts out as a seemingly innocent crush soon turns dangerous and deadly.

Who is responsible? His long time friend Jules, frustrated that their platonic relationship won't progress to the next level? Bess, a shy classmate, increasingly jealous of his friendship with Jules? Or Jeffrey, a bright outcast who has a crush of his own on Bess while suspecting that she has feelings for someone else?

One thing is certain, time is running out and Scott must uncover who the obsessive stalker is before it's too late.

The Nightmare Before Christmas
Rating: 10.0

I actually put the wrong movie on and was planning on watching 'Under the Bed' but as this started off with so much promise and potential I decided to carry on watching - unfortunately I should of gone with my first instinct. With a plot line that has been used many times beforehand I expected something out of left field and while there were a few surprises it was so slow and dragged on far too long before anything really happens.

Everyone has a crush at one stage or another, that is nothing new but it is how you conduct yourself around that so what called crush that really defines you as a person and the potential for a relationship with him/her. The crazy thing with this movie is there are so many people with crushes and some just take it to the extreme. Following them, hiding in bushes, stalking them on social media, breaking into there house while they sleep it is really a little cray cray and I think a touch out of reality.

The casting is good, except I do not understand why they had to make Bess so socially awkward, at times you just cringed at her lack of conversation skills especially when faced with Scott. Also I do not fully understand how he jumped to the conclusion that it was Bess and she never questioned what he was talking about. The whole movie was a tad weird and left me scratching my head on more than one occasion. I also didn't enjoy why they added mystery to areas where there did not need to be any or why they did not follow up on particular areas like what happened to Corey after his fall.

It is not a bad movie, it is just extremely slow. While the ending is good it is not great and as a whole the movie let me down. Okay to watch if you have nothing else lying around.

A basic, tried and true, plot line. You have your hunk who has a girlfriend/close girl friend, nasty things start to happen, girl blames boy until they realise it is a crush gone majorly wrong. So as this is nothing new, I expected nothing new and so was happily surprised when what I thought was going on wasn't what was going on.

Without giving away any spoilers, this starts off with a death at a young age, apparently caused by the crush. Skip forward a good few years and we have a young man, just finishing up high school, who starts to get notes and menacing behaviour towards his best friend. He has to find out what's going on as things get progressively worse.

This has a long build up, which while slow, was done well enough that it didn't feel too dragged out. Most of what I expected to happen happened but there was one big twist that I just wasn't expecting and had me going "no way!". The actors did a good job, there was a familiar face as one of the teachers (I just can't remember from where) and they were believable.

Seeing as how my husband went to bed halfway through, and I stayed up till half past eleven to finish it, I shan't be complaining if he asks to start up from where he left it tomorrow.

Join Time Team on an archaeological discovery of Britain's past.

13 riveting episodes set in diverse locations from Barra in the Western Isles to Dungannon in Northern Ireland. Time Team have only 3 days at each location to excavate, retrieve and unearth history from the Palaeolithic to the Industrial age.