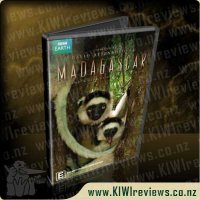 An astonishing series revealing the extraordinary wildlife and dramatic landscapes of one of the world's most bizarre islands. Lying just off the coast of Africa, Madagascar is a land of misty mountains, tropical rainforests and weird spiny desert scrub. Here, the wildlife has evolved in splendid isolation to become strange and totally unique.

The series captures, sometimes for the first time, the diverse and rare wildlife that inhabits this incredible land. It features amazing footage of the lemur - a monkey-like group of creatures made up of 100 different species unique to the island - but also reveals frogs that turn from brown to bright yellow; wasps that pluck tadpoles from tree-nests and fish that swim upside-down, as well as following the romantic life of the world's tiniest chameleon.

This series is an ambitious and intimate portrait of a fascinating but perilously fragile island - one of the few places left on Earth where there are still wildlife mysteries waiting to be discovered.

I admit that despite my avid love of nature docos, especially those fronted by Sir David Attenborough, the island of Madagascar is one I haven't seen much about... if you discount the series of cartoon movies by the same name. However, many of the animals are much better known from other documentaries I have seen.

Seeing the huge array of subspecies that make up the "Lemur" species, I was in awe of some of the evolutionary paths they have taken to survive, including one variant that is quite happy munching down plant matter so toxic it could kill an adult human. I was also really taken by the tiny little chameleon and the trials and tribulations it must go through to procreate - I tell you, even when I was at my peak fitness levels, I don't think I could have managed an equivalent feat!

Packed onto 2 DVDs, there is over four and a half hours of amazement in this set... and it really does have something that will appeal to almost anyone. My 5yr old son was enthralled, my 13yr old son was amazed, and I was just blown away by the sheer variety. This island really can do all four seasons in one day, with everything from arid desert to sultry rainforest on the one chunk of land... and more than enough lemurs to take advantage of every niche there is.

Overall, this is an amazing addition to any home library, and if you homeschool your kids it's an essential pierce of kit for any geography, biology and general science curriculum.

BBC DVD is thrilled to announce that the previously incomplete 1968 Doctor Who Cyberman story - The Invasion is now available on DVD in its entirety. The two missing episodes from this classic Patrick Troughton story have been recreated using striking black and white animation, to stunning effect.

This unique project uses animation based on the original actors and ... more...