« The Pirate Company: On the Trail of the Golden Toucan review

ProdID: 4682 - Under the Bed
Directed by Steven C. Miller 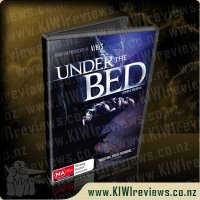 Under the Bed product reviews

Every child knows about the monster under the bed - Neal Hausman's mistake was trying to fight it. Neal (Watson) has returned from a two year exile following his tragic attempt to defeat the monster only to find his father ticking even closer to a breakdown, a new stepmother who fears him and his little brother terrorized by the same monster.
While Neal and Paul work together to try and fight the nocturnal menace, their parents are taking desperate measures to get the family back to normal. With no support from their parents, the brothers have nothing to rely on but each other and courage beyond belief.

This movie was very much a mixed bag, it wasn't anything great but it turned out ok in the last, ummmm, 10 minutes. Basically, Neal has been away for two years after his attempt to get rid of the literal monster under his bed and his mother dies. Upon returning home to a dad who still talks to him as if it's all a phase, a stepmother who is unsure of him and his little brother now terrorized by the monster.

Now, as with any movie, there is always a degree of suspension of reality, but I still find it hard that we are supposed to believe that a child (I think he was about 10 years old) hasn't slept in his bed, at night, for 2 years and NO ONE has noticed!!!!!! Sorry, but even that is a stretch for me.

This movie is incredibly slow, in fact, parts of it were so slow that in one scene I actually thought that the movie had been put on pause, only to discover that the brothers were just standing in the same position for at least a minute and a half. This does take such a long and slow build up that one feels like giving up on the film. The last ten minutes has the real action, gore and monster. The monster is suitably freaky looking, but the final defeat of it was not only cliched but no effort made for some sort of answer.

I don't think I would watch this again any time soon but it is a suitable enough throwback to the old style horror films where it is 90% build up, 10% action.