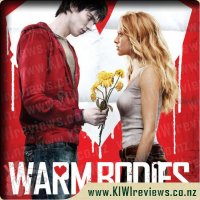 R (Hoult) is a young man facing the existential crisis that comes with being a zombie. Grunting his way through a post-apocalyptic America with the mindless hunger that plagues the undead, his inner life is full of wonder and longing for the time that must have gone before.

When the memories in one of his victim's brains affect him, he finds himself attracted to, rescuing, befriending and eventually falling in love with the dead boy's girlfriend.

Julie (Palmer) is a blast of colour in the dreary and grey landscape that is the "life" of the un-living. Their tense, awkward and strangely sweet relationship develops into something that will not only transform R but his fellow zombies and possibly their entire lifeless world.

I guess it was only time before zombies fall in love. I mean we have Edward and Bella, Elena and Stefan or Damon depending on the day of the week and then there's Sookie and Eric or Bill so if Vampires can do it why can't zombies?

This was a little different than most zombie movies. Firstly, these zombie get to share the hosts memories if they eat the brains which is kinda cool - like their own home movie. Also these zombies are not walking around pathetically saying brains, instead some of them can still talk and they can fall in love, which is very weird. Having been brought up with the Night of the Living Dead, Dawn of the Dead and now The Walking Dead it was hard to see these walking corpses as compassionate and loving.

It was also weird to see the zombies living in an airport, except for R, who lives in a plane and listens to music - completely out of the ordinary. I did find this movie refreshing and enjoyed it for what it is - a romantic zombie movie. You had your evil zombies and your good zombies but mostly its about teen love and conquering everything in their way so they can be together. There were moments when you were thinking what the..... like when the zombie is driving a car but as a whole it's a sit down and take it as it is kinda movie. Its not to be taken seriously and is definitely watchable.

I'm married to one of the biggest fan of Zombie movies ever! I can give or take them as I find after a while they become the same old same old. Zombies attack a few hero's save people, there is usually a love interest in there and lots of blood and guts.

I'm pleased to say Warm Bodies isn't like that and it's a change from the norm, it's more a love story then a full on blood and guts zombie movie. Warm Bodies is about a Zombie named R who is a little over the zombie life style, wandering the streets grunting and eating people.

One day on a hunt for food R meets Julie a human, after eating her boyfriend's brains he feels the need to protect and rescue her. R takes Julie to his home, slowly she realises there is more to him than a flesh eating Zombie and a friendship begins to form. Together R and Julie set to change the divide between zombies and humans.

I really enjoyed Warm Bodies and quickly went out and brought a copy for my movie collection. It makes a refreshing change not being your normal zombie or romance movie. I would recommend the movie to anyone who is in a mood for a light hearted feel good movie. It even got the seal of approval from my husband who usually refused to watch anything romantic classing them as chic flicks. Warm Bodies has a little something for everyone.

Romance and Zombie aren't two words that you would usually associate with the other, so this had me curious as to what the end result would be. Would it be too gooey, too gruesome, too over the top or what? What I didn't expect was a movie that mixed the elements of a decent romance, comedy and zombie flick together and come out with a well balanced film.

When we start off in the film we find out the R isn't your typical zombie to begin with, he is bored with his 'life', has a friend who he sometimes grunts with and he collects things. The movie has R narrating at points via voice over and it's done quite well. One day when out doing his usual zombie thing he aids in an attack against some living and when eating the brains of one, something in him begins to change.

R ends up saving and protecting Julie (who's father is the leader of the survivors) and she realizes that he is changing, becoming human again, and thus they set out to change things together. This is all done well, and it's realistic, the change doesn't happen instantly, it takes weeks, months. The script is really well written, you feel for the characters, especially R and Julie, hoping that everything works out.

There isn't much gore in this film, which is great, and it's refreshing to watch a movie with literally only one or two swear words! This was a refreshing movie all around, limited swearing, little gore, blood or guts, the only 'naked scene' is when Julie takes off her wet clothes, and we see nothing. This film proves that you can have minimal amounts of these things and still produce a great film.

The actors do a great job and Hoult (R) is brilliant in his role. The special effects are well done with make-up taking the lead. There are special effects when it comes to the 'Bonies' (zombies who are too far gone), but since there is so little to them, there wasn't much chance to go wrong with them.

I really enjoyed this movie, especially that it puts a new twist on everything and doesn't need to fall back on gore, swearing or nudity. I would suggest this to anyone who likes zombies or romance or comedy. Well worth the watch.

In a divided land, it takes a rebellious boy and his clandestine love for a princess of an opposing race to stop a war orchestrated by a power hungry villain.

Delgo, an adventurous dreamer but naive teenager, must rally his group of troubled youth and some unlikely friends to protect their world from conflict between the terrestrial Lockni people, who harness the mysteries of the land. And the winged Nohrin people, who rule the ... more...