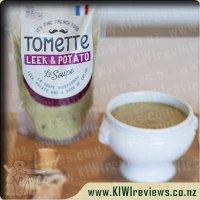 La soupe Vichyssoise did not originate from Vichy as many would believe... It was created in New York by a French chef who came from Vichy! Should we copyright it?

Having never been a huge fan of French cuisine in the past, usually preferring instead the cuisine from neighbouring Italy, and not being a huge fan of leeks, this one was going to be a real 'leap of faith' meal for me. Still, nothing new is found by looking in the same old places, so... here we go...

I decided to play it a little safe, and heat up only a small portion of the soup to start with. The smells coming off it as it warmed were certainly appealing and when it was up to temp, a taste-test proved it to be, surprisingly for me, quite palatable indeed. The creamy texture and its green colour could, I suppose, be a bit off-putting for some, but if you just think of mushy peas - a staple dietary piece for anyone whose parents or grandparents were good ol' British stock - then it's easy enough to get past.

So, having discovered it was more than tolerable - it was bordering on downright tasty actually - I decided to see if I could do anything to it. Recalling the left-over bacon I had fried up for that morning's Bacon & Egg Breakfast Pizzas, I threw a good handful (or two) of fried bacon bits into the saucepan and brought the rest of the soup up to heat.

The slight added saltiness, and that oh-so-appealing Vitamin Bacon smell, complemented the soup wonderfully, and when served with triangles of wholegrain toast-slice bread and a few grinds of fresh black pepper on top, it was an amazing lunch. Though the packet says "Serves 2" I easy could have eaten the lot by myself... if it weren't for the bread and extra bulk of bacon added. So Mr13 helped me polish off the last of it. (He was reluctant at first, until I reminded him that the only way to discover new foods was to try them... then he was hooked!)

Overall, quite the stunning eye-opener for me really. I never would have picked leek and potato as such a great combo for my taste buds. I have no idea who served me leek in my youth, or exactly how they musty have butchered it to put me off it so badly I am still resistant over 35 years later, but I am sure glad I girded myself and gave this a try. To Thomas and Etienne I say, "Je vous remercie du fond de mon coeur et de l'estomac, messieurs!"

Maketu Pies, made in the Bay of Plenty, and distributed to fine food outlets, for you to enjoy.

Available in a wide variety of flavours, there's a pie for everyone.