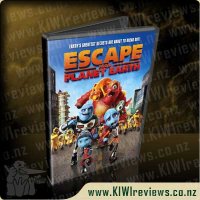 This animated family comedy catapults moviegoers to planet Baab where admired astronaut Scorch Supernova is a national hero to the blue alien population. A master of daring rescues, Scorch pulls off astonishing feats with the quiet aid of his nerdy, by-the-rules brother, Gary, head of mission control at BASA.

When BASA's no-nonsense chief Lena informs the brothers of an SOS from a notoriously dangerous planet, Scorch rejects Gary's warnings and bounds off for yet another exciting mission. But when Scorch finds himself caught in a fiendish trap set by the evil Shanker it's up to scrawny, risk-adverse Gary to do the real rescuing. As the interplanetary stakes rise to new heights, Gary is left to save his brother, his planet, his beloved wife Kira and their adventure hungry son Kip.

The kids had requested that we borrow this on DVD a few times, but as it was at full price we had kept putting it off, we then bought them a copy (it was a three for $20 and we needed one more movie to complete the deal), we then knew the kids loved it and I bought them a copy forgetting that they already had one. We watched this as a family and there were tonnes of times where the kids were laughing their heads off. I loved hearing William Shatner in this, it was a good little throwback for me to his Star Trek days. The voice acting in this is really well done and once I got into the movie I didn't think about who was who anymore.

The plot is a fun one, our main character has a son who adores his uncle as his uncle is a huge hero, but one day he is kidnapped and off runs our main guy to save the day and uncover all the devious plotting that is going on. The special effects are well done and this ends up being a rather fun movie for the whole family, my three kids certainly enjoy it and it has been played regularly.

Theres no real amazing plot or spectacular happening. Its a fun exciting awesomely animated kids movie. One that even mum and dad can suck it up for a couple hours and enjoy with the kids. In this movie thrres the geeky dad who must save the day whilst also proving to his son that hes not completely useless. They are aliens by the way :) Then theres the son who is now a grown man looking for revenge because his father was killed by an unitentified object when the boy was younger. They are humans by the way lol

These two groups come together and theres your movie lol the kids loved it. All the dufderent types of aliens, the funny characters, the basic storyline. The kids really enjoyed it. And I admit I to think it was pretty good too and would even watch it again :)

I had heard mixed reviews about this movie so wasn't sure what to expect but our family really enjoyed this movie. It had a really cool voice crew too with Brendan Fraser, Sarah Jessica Parker, Jessica Alby, Ricky Gervais, and William Shatner. I have always enjoyed William Shatner and found he did a great job of playing the villian Shanker. I also loved Ricky Gervais role his character Mr James bing was quite sarcastic in his humour and I felt this was a great character for Ricky.

The storyline was pretty simple with Scorch Supernova takes off on a mission to Planet Earth after he receives an SOS from there. His brother Gary normally helps him on all his missions and is definitely the brains in the duo advises him not to go as he knows no other alien has ever returned from there but Scorch doesn't listen. Scorch ends up in a trap and is captured and imprisioned at Area 51 and it is up to Gary to save him.

The perfect opportunity for Gary to be thrust into the spotlight as the hero as his brother Scorch usually gets all the glory. I thought this was nice as even Gary's son looks up to Scorch as a hero and his dad Gary really proves himself as the real hero and saves the day. I really loved that part of the story which to me was the best part in the whole movie.

I thought the graphics were outstanding the animation was beautiful and fantastic with the bright and rich textures of the backdrops and I liked the animated aliens which I thought were really well done. I liked the animated aliens on here better than the aliens on the Wizards vs Aliens DVD we watched recently even though they were quite a similar style. All in all this is a great little family movie for a rainy day.

If you have seen "Planet 51" and "Monsters vs Aliens" then you're going to find this movie has a very familiar vibe - there's even a bit of "Space Chimps" in there too. And if you ENJOYED those movies, then you'll find this movie just as much fun!

Gary is a very believable character - quiet, geeky Dad with plenty of brains but seriously under-equipped in the self-confidence quota. When the big test of character comes, he rises to the challenge and faces the odds with intelligence and stoic fortitude... not only does he have to save his brother, he has to redeem himself in the eyes of the most important being in the universe... his son.

I would love to say there is a neat plot with some great twists and lots of character definition... but there isn't. This isn't a drama or action movie... it's a kids flick with as much intellectual and cognitive stimulation as a fish'n'chip combo has nutrition... but just like your favourite junk food, this is so wonderfully nice to just sit back and enjoy and leave all the worrying for another time.

Overall, well worth taking the kids to over the holidays, they'll love it, you'll have a good laugh in places, and you'll all feel better afterwards. And what is it with those yellow iso-suits?! I kept waiting for Mike Wazowski to waddle out from around a corner looking for Sully!

1This special one-off drama travels back in time to 1963 to see how the beloved "Doctor Who" was first brought to the screen. Actor William Hartnell felt trapped by a succession of hard-man roles. Wannabe producer Verity Lambert was frustrated by the TV industry's glass ceiling. Both of them were to find unlikely hope and unexpected challenges in the form of a Saturday tea-time drama, time travel and monsters! Allied with a team of ... more...