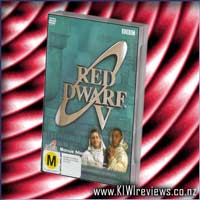 Disclosure StatementFULL DISCLOSURE: A number of units of this product have, at some time, been supplied to KIWIreviews by the company for the purposes of unbiased, independent reviews. No fee was accepted by KIWIreviews or the reviewers themselves - these are genuine, unpaid consumer reviews.
Available:
3rd December 2004

Contains all episodes from Series 5:

Holoship - Rimmer is transmitted from Red Dwarf to the advanced Holoship Enlightenment which contains the cream of the Space Corps. Everything he has dreamed of exists on this ship. Can he earn a commission to join this fantastic vessel?

The Inquisitor - The Inquisitor roams through Time weeding out lifes wastrels and deleting the worthless - the Red Dwarf crew are in big, big trouble.

Terrorform - Rimmer is taken prisoner inside his own mind and ends up being stripped, oiled, manacled, licked, chained, taunted, humiliated and nearly has a knobbly thing the size of a Mexican agarve cactus jammed up where only customs men dare to probe.

Quarantine - After an encounter at a viral research centre, Rimmer forces the crew to spend twelve weeks in quarantine. But whos watching the watcher?

Demons & Angels - Who knows what evil lurks within the hearts of men? The boys from the Dwarf find out when they encounter their dark sides - four evil doppelgangers hell bent on their destruction.

Back to Reality - The crew of Red Dwarf discover an abandoned space ship on an ocean bed but suddenly the salvage operation doesnt sound quite so sexy when they realise all of the occupants of the vessel committed suicide. Attack by a gigantic sea monster makes escape the favourite option.

Many years ago, I saw a late night show here in NZ called "Friday Night", hosted by Frank Flash, a strange skinny guy with an outfit covered in flashing lights. The guy seemed to be on speed or something, he was just 'out there'. The show was interesting, but some of the newby showlings it premiered had promise. Max Headroom and Red Dwarf amongst them.

Red Dwarf really appealed to me, simply because the characters were just so divergent, you had to wonder what sort of common ground could possibly exist. It started with three, Lister the Curry King, Rimmer the hologram of a dead smeghead, and The Cat, the sole surviving member of a new species, Homo Felis, evolved from a pregnant cat Lister smuggled onboard the ship.

It was the cat he smuggled on board, and his refusal to hand it over for scientific experimentation and death, that caused him to be locked in a Stasis Pod, allowing him to survive the radiation leak (caused by Rimmer) that killed the entire crew. Lister's 'short stay in Stasis' lasted 3 million years. Talk about no time off for good behaviour.

Shortly after the start of series 1 a new charatcer was added, Kryten. A slightly deranged android with a head shaped like a novelty condom, and an alarming array of attachments for his groinal socket, and a propensity to use them in public. (Don't ask, just don't ask. Nothing overtly sexual, just scary.)

Series 5 has the character's well entrenched, and out and about making a total mess as usual. I won't go into the various episodes themselves, because you can read them up top. However, I will admit my favourite of all episodes is in this series. "Back to Reality." You just have to love their alter-egos, especially Cat's 'real' self. :)

Overall, this is still a great series, and I am looking forward to Series 6, the only set of episodes I missed seeing on TV when it flitted thru our airwaves many years ago. If you have encountered Red Dwarf before, you'll be wanting to add this to your collection. if you have never seen them before, you may wish to give this a try if you like the British version of slapstick comedy. Not as crass and blunt as the American versions, but not as 'naughty' as Benny Hill. (Now THERE'S a scary man for sure!)

New Zealand's family viewing favourite, The Zoo, is back! But this time, it's all new on The Zoo. All the action at Auckland Zoo is now shot in HD and special cameras have been installed to capture exclusive behind-the-scenes footage.

As well as catching up with the animals and their day-to-day routines, the keepers go into the field, as they release endangered birds onto islands in the Hauraki Gulf and assist with the Rena ... more...