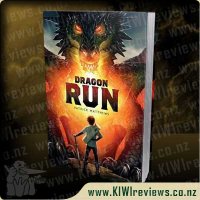 A boy goes on the run in this fast-paced fantasy debut. Can a zero become a hero?

Testing Day is supposed to be a day of celebration for Al Pilgrommor. Born into a wealthy family, he expects to follow in his successful father's footsteps. Of course, that all depends on the rank number Al receives at the testing. The higher the rank he has tattooed onto his neck, the better his life will be.

To his surprise and horror, Al is revealed to be rank zero, the lowest of the low. He's now not only an outcast - he's also a danger to his entire family. So Al goes on the run, fleeing the brutal Cullers, men who hunt down zeroes... and put them to death.

Cast out of his home, cut off from his friends, and armed with only a sword and his wits, Al is reduced to just surviving. As he meets other outcasts, however, he begins to suspect that he is a pawn in a larger game - and that he might have the power to tip the scales in a high-stakes struggle between man and dragon.

I must say I found this book to be quite fun and exciting to read! I have had a fascination with dragons, I mean, I was born in the Chinese year of the Dragon, after all; So as you could expect the title was enough to get me interested. I loved the cover, the design was quite complex, and whoever drew it must have had a good anatomical knowledge, based on the level of sophistication shown in the design of the dragon.

The story started off quite good, it began as quite a quiet story, but near the middle of the book, but then it began to change, and became less pleasant. Let's just say that it began as something a bit medieval, then it evolved into more of a Victorian age kind of atmosphere, and then it ended with sort of a spiritual feel. The storyline moved along at quite a good pace, even when I thought the book had finished, I realized that I was only halfway through, so there was plenty of action to go around.

It was quite an evil concept to pretty much label people, and those who have low numbers on their necks are outcasts; It's pretty much a separation, like us people today are separated into the rich and the poor, it made me sick thinking about the concept. The price is great, it feels a little O.T.T, but I have to keep reminding myself that this isn't exactly like the other books I've read, and therefore, deserves a higher price. I didn't lose track of time that much, but every other aspect gets a full score. Overall, I think that this book is one that I will be holding onto for quite a while, and I highly recommend it for other people as well, even people who aren't big fantasy fans!

Not only does Dragon Run have a great cover, but it is also a great read. Patrick Matthews has created a fun, exciting, action packed story that is full of realistic characters.

This has a good variety of action, it has sword fights, daring escapes and, as expected from the title, dragons!!!!!! The story though is what really hooked me and kept me glued to the pages. This is a fast paced book which explains itself, so there's no gaping holes in the story, and so well written that it is a nice and quick read.

These characters are so well written that they are fully believable and not only that, but while these 12 year old's do make a big difference it doesn't feel like it's out of the blue. They fulfil plans that have been in place for generations. Al's sword fighting ability was good, but not extraordinary, his escapes are all thanks to some help from others. Whilst Al is the main character, the way that the book is written means that everything that takes place in the book makes sense and is realistic. Society is not changed forever because one boy decided to make it so in a matter of days

This is a fantastic book that is really well written and I would happily read a sequel.

Have you ever wanted to know which were the biggest, meanest dinosaurs of all time?

Or how dinosaurs hunted their prey?

Most importantly, how do we know all of these amazing facts about dinosaurs?

The Great Big Book of Dinosaurs explores the world of these remarkable reptiles, and how scientists, called ... more...