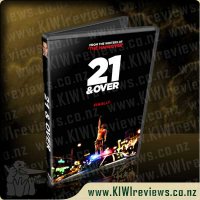 21 and Over product reviews

Straight A collefe student Jeff Chang (Chon) has always done what's expected of him. But when his two best friends Casey (Astin) and Miller (Teller) surprise hm with a visit for his 21st Birthday, he decides to do what's unexpected for a change, even though his critical medical school interview is early the next morning. What was supposed to be one beer becomes one night of chaos, over indulgence and utter debauchery in this outrageous comedy.

Two university students decide to drop in on their old high school friend and take him out for a night of drinking and rebel rousing as he has finally turned 21, thus being a legal drinker.

What follows is a night , in the fashion of movies such as The Hangover, where things go haywire and nothing is remembered fully and a friend is lost (on the eve of a most important event), nothing new but the ad looked funny so we thought that we would watch it. Again, following the similar storyline, we start near the end of the story, rewind back to how it all started, and then walk through the steps and eventually locate said friend, just in time.

Lots of crude humour in this, most we didn't find too funny (it's the same jokes just different delivery) but there are actually a few good jokes thrown in (one such joke that I still remember is when drunk friend is on top of a car and told by police to 'get down' and so he starts boogying on down). The seemed to try and give the story a bit more of a backbone, by having the friends concerned that one had attempted suicide, but then their assumption got turned into a joke, not appropriate in my mind, which is why I won't watch it again.

The characters are two dimensional and there is nothing new here.

Two university students decide to drop in on their old high school friend and take him out for a night of drinking and rebel rousing as he has finally turned 21, thus being a legal drinker. What follows, naturally, is a night of things going haywire and seems to go along the lines of movies such as The Hangover. We start off near the end then rewind and go through the paces, along the way they loose their friend and have to search for him.

Crude humour abound, there are actually a few good jokes thrown in throughout the film. They did attempt to add a serious twist to the film by having the two friends concerned that their friend attempted suicide and then end up making it a joke and turning it into something light (which from personal experience isn't something I want a film to do).

The characters are horribly two dimensional and there is nothing out of the ordinary. The three friends have all lost touch, they donâ ™t really know each other that well any more, boy meets girl, girl is dating main protagonist etc. etc. The characters were your basic stock characters and so didn't add anything to the film.

Whilst there are some funny moments this just strikes me as too much of a copycat attempt at a good movie kind of movie and so whilst my husband is happy to watch it again, for me it will be a on-in-the-background type of film.

It was done almost in the style of the hangover with the three boys going out and having a wild night out except Jeff Chang needed to be home by 7 for a medical school interview the next morning. Miller gets Jeff very drunk and then they must try to get him home although they don't know where he lives. The adventures that follow will certainly have you laughing out loud and not being able to believe just how much trouble the three boys can get into in one night!!

As Casey and Miller search for someone who can tell them where Jeff lives they learn things about Jeff that they didn't know and begin to question why they haven't been better friends, so there are deeper messages about friendship and how when you grow up and leave college you can still have fun with your friends. They learn that Jeff doesn't even want to be a doctor and with their help Jeff stands up to his Dad and lets him know he wants to make his own choices in life.

There was also the romance story between Nicole and Casey in the movie too so definitely a movie that is suitable for the boys and the girls. I would definitely recommend this movie to other family and friends and I think it would be enjoyable to teenagers and young adults especially.

Lt. Col. Bill Cage is an officer who has never seen a day of combat when he is unceremoniously dropped into what amounts to a suicide mission. Killed within minutes, Cage now finds himself inexplicably thrown into a time loop - forcing him to live out the same brutal combat over and over, fighting and dying again - and again. But with each battle, Cage becomes able to engage the adversaries with increasing skill, alongside Special Forces ... more...