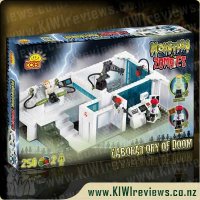 Get your freak on and play Igor to the evil Professor Frankenfly as he brings his creation to life in his Laboratory of Doom!

Use the crane to hoist the glow-in-the-dark monster out of the construction room and on to the electro-table then use the radioactive cannon to shoot exotic particles into its flesh and prepare to throw the switch!

The greatest treasures in life are your whanau, and for an old Koro like me, the pleasure in watching my mokopuna doing the simplest of things can not be measured on any scale. On a horrible, wet afternoon it was joy absolute to be able to sit back and watch my youngest whanau members working as a team to build a horrible mutant fly scientist's laboratory of doom.

Having received this for review a little while ago, I was waiting for the right opportunity to bring it out and let the little ones go wild, fully expecting there to be pieces lost, or eaten, and maybe a bit of rivalry over who got to build the different sections of the lab, but to my great delight and pride, they all teamed together and worked in beautiful harmony to build this model straight out of a Frankenstein movie.

The instructions proved to be easy to follow, and I was very pleased to find that the kit contained every single piece it should have, plus a couple of spare bits as well. When one of the youngest offered to pop next door and bring some of his lego over so they had some "really zoomin' extra bits that will make this really pop, like something outta a Saw movie" I didn't know whether I should be so proud of his willingness to share, or have some stern words with his papa whakaangi about the sorts of movies he is allowed to watch.

Because it was dark outside due to heavy rain, and we had the drapes closed to try and keep some warmth in, we had the lights on, so it wasn't long until one of the mokopuna noticed that bits of the kit were supposed to glow in the dark. As youngsters will do in familiar territory, they took it upon themselves to treat my whare as their wa kainga, and soon the doors were being closed and lights switched off to see if there was glowing going on. The joy and delight over the small glow they discovered was out of proportion to the effect, but it made them so happy and gave them great pleasure, so it was worth it. Being nearly blind in one eye and quite near-sighted in the other, I of course couldn't see a damned thing, but took delight from their excitement any way.

As I said, the real pleasures in life are to be found in the smallest of things. There may be something profound, or quantum in that, I am not sure.

This was a wonderful kit and brought an entire afternoon of pleasure to 5 usually quite restless tamariki, and some peace and calm to an old tane who has long ago lost the ability to do anything more than grizzle like an old pirikoti when he has the newest generation dumped on him to babysit while the adults go out to the movies. I can't say I would ever be able to afford even this very reasonably priced kit, but I know what I will be "suggesting" to the said parents as suitable birthday and Christmas gifts that can be dropped off with the mokopuna in future "visits".

With exciting textures and colours, the CLIPO system offers a variety of sensory experiences for toddler's playtime.

This bright fun bucket contains a range of standard blocks, as well as a number of novel, interactive pieces with special features, and can also be part of the fun with it's lid also having the moulded CLIPO stumps on top.