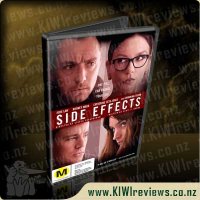 Disclosure StatementFULL DISCLOSURE: A number of units of this product have, at some time, been supplied to KIWIreviews by the company for the purposes of unbiased, independent reviews. No fee was accepted by KIWIreviews or the reviewers themselves - these are genuine, unpaid consumer reviews.
Available:
2013

Not quite what I expected from a movie, and that is almost always a good thing. You have a young woman who had it all until her husband was arrested for insider training and placed in jail. She waits for him and after four years he is released and they try to get their life back into gear. She is hit again with depression and after a self harming incident ends up seeing a psychologist. She is prescribed a new drug and the events that unfold have a dire effect on everyone.

Going by the blurb I thought that this was going to be a pretty cut and dry movie. Girl gets depressed, girl takes drugs, drugs have BAD side effects, girl kills someone, end of. But... it wasn't so cut and dry and ended up doing a great switch.

I wonder how much of the medical side of things is based upon fact, I would presume a decent amount as you don't want people calling it fantasy when it is meant to be a thriller. For me it was quite an interesting film in that my husband suffers from major depression and so to every now and then hear my husband agreeing with something in the film was some good insight into him and his mind.

The movie is a bit slow until it gets to the last 45 minutes of the film, but don't let that deter you. You plod along without it being anything amazing and then, all of a sudden, to quote my husband - "This just got really interesting!" All of a sudden you are sitting up and paying attention to twists that you didn't see coming and it is great!

This was a really good film, I didn't expect to enjoy it as much as I did, but once it gets there you're really rolling along and you can't stop watching. This is a great movie and everyone did a wonderful job in it.

David and Paige Walling and Terry and Cathy Ostroff are best friends and neighbours living on Orange Drive in suburban New Jersey. Their comfortable existence goes awry when prodigal daughter Nina Ostroff, newly broken up with her fiance Ethan, returns home for Thanksgiving after a five-year absence. Rather than developing an interest in the successful son of her neighbours, Toby Walling, which would please both families, it's her ... more...