« Guess How Much I Love You: Forever and a Day review 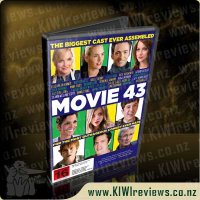 From the twisted minds of producers Peter Farrelly (Hall Pass, Shallow Hal) and Charles Wessler (There's Something About Mary, Dumb & Dumber), comes Movie 43 - the outrageous new ensemble comedy starring some of the biggest names in Hollywood.

Movie 43 is not for the easily-offended and contains jaw-dropping, sometimes shockingly disturbing, but always entertaining intertwined storylines you'll have to see to believe. The entire premise of the film is rather irritating, and instantly you realise that you are in for watching what is essentially an extended clip show. Almost looking like an accumulation of the blooper reels of 43 individual unrelated films, the humour has no art to it. If you want to see people react in the worst possible way to an uncomfortable situation, then maybe you will enjoy this film. If you want to lose respect for any of the actors and actresses named above, then maybe this will also be a good watch.

But for me, I was expecting something of a plot. At least a plot that provided more than channel surfing through poorly written sketches on YouTube. Rather pointless amounts of nudity, and references to genitals do little to make this film any more appealing. Honestly, one of the worst films that I have ever seen. On the bright side, I managed to watch the film all in one go, and the visual quality was good. but the writing of the film was horrendous.

So in my opinion, AVOID THIS MOVIE.

When I saw this movie up for review I did my normal thing of looking at the cover and seeing who the actors were, that sort of thing. I didn't do a lot of research about what it was about, I just read the cover. I was expecting it to be a really funny movie with it's selection of top comedy actors but it turns out it was completely not for me at all.

I think if you have a particular sense of humour and don't get offended easily you might like it but to me it was a real sick sort of comedy which the majority of the time I was left thinking "what on earth" rather than laughing. In saying that there were moments when things were funny but the majority of the time in my opinion they just weren't. It reminded me a lot of the outrageously stupid comedy of the Scary Movies series of movies which I also wasn't a fan of.

The basic flow was a guy trying to sell his movie ideas to a producer which came out as many different short movies so although the full movie length was 90 minutes it was made up of short snippets of all sorts of disconnected ideas tied together by the two guys in the producers office. Some of the short films were quite well done I liked some of the advertising clips like the advert for tampax with the shark.

The short film at the end with the animated cat was also very strange and again such outrageous sick comedy that it was quite offensive. This is definitely not a movie for under 16's in my opinion as there is lots of swearing, violence, nakedness, sexual conduct etc. Totally not my thing but I am sure there is a particular audience it would appeal to - perhaps I am too old and boring!

A group of friends on their way to a college football game fall prey to a pair of murderous brothers in an abandoned small town.

They discover that the brothers have expanded upon the area's main attraction- the House of Wax- now the group must find a way out before they too become permanent exhibits in the House of ... more...