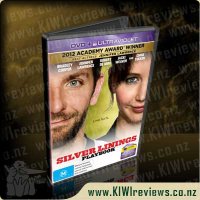 Sometimes things don't always go according to plan... Pat Solatano has lost everything - his house, his job, and his wife. He now finds himself living back with his parents after spending eight months in a state institution on a plea bargain.

Pat is determined to rebuild his life, remain positive and reunite with his wife, despite the challenging circumstances of their separation. All Pat's parents want is for him to get back on his feet - and to share their family's obsession with the Philadelphia Eagles football team.

When Pat meets Tiffany, a mysterious girl with problems of her own, things get complicated. Tiffany offers to help Pat reconnect with his wife, but only if he'll do something very important for her in return. As their deal plays out, an unexpected bond begins to form between them, and silver linings appear in both of their lives.

Based on the novel of the same name by Matthew Quick.

Scary Stories To Tell In The Dark

Pat Solatano (Bradley Cooper) has a nice, normal, stable life. He is married and has a good job at the local school. Or at least it was a nice normal life until one moment and a very bad decision leads to Pat being forced to serve eight months in a state institution. His mother manages to get him released and he moves back into his parents home with strict orders not to go anywhere near his wife but he is determined not to let a little thing like the law get in the way.

Pat meets Tiffany (Jennifer Lawrence) who has problems of their own. Pat isn't sure what to think of her but when she offers to help him to get back with his wife in return for her help, his desire to reunite with his wife leads to them working together and finding out more about themselves and each other than they thought that they would.

The supporting cast in this was brilliant and they deserve a mention. Chris Tucker plays a fellow state institution 'inmate' who keeps managing to get out despite not yet being released. Robert DeNiro and Jacki Weaver play Pat's loving yet concerned parents and we also have an old friend of Pat's and his wife (who is Tiffany's sister). All of these characters add a great deal to the movie and provide some great comedy moments of their own.

Of course Pat and Tiffany are wonderful characters and could have held the movie on their own. Cooper does a great job of playing a man with real mental health issues and how he must learn to cope and grow so as not to end up back in the institute. Lawrence is great as a troubled young widow now trying to sort out her life better.

The overall plot of the movie was easy to follow and all rang true. There wasn't anything in the movie that had me thinking 'oh that would never happen in real life'. It had some great laughs, several moments of 'oh god dude, give it up already' (aimed at Pat) and some touching moments of concern from his parents.

I can see why this got the response that it did and I think that all the actors in this movie did I great job of it. This is one of the movies to watch this year.

Score: 10.0
Product reviews for listing 4337: Death at a Funeral
Directed by Frank Oz

A dignified send-off for a loved one erupts into uproarious chaos when romance, jealousy, in-laws, hallucinogens, dark secrets, life-long yearnings and a spot of bold blackmail all collide graveside in the irreverent British comedy, Death at a Funeral. Directed by Frank Oz and featuring a cast made up of the cream of Britain's crop, the film mischievously explores what happens on the day when a typically ... more...