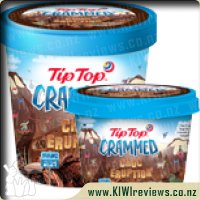 Chocolates Are Us - Ginger Brittle
Rating: 9.4

I love ice cream, and although I must admit that when buying ice cream chocolate is not necessarily a flavour that I would go for as I much prefer others, I was still keen to give this a try as I had really enjoyed the Tip Top Crammed Jammin Donut ice cream.

The first thing I noticed when I removed the lid from the tub was huge overload of chocolate within. The chocolate ice cream had a fantastic amount of chocolate sauce swirled between, and although I couldn't see any of the chocolate brownie pieces from the get go, as soon as I scooped a spoonful of ice cream into my bowl, it was there and a very generous amount in saying that. I was pleasantly surprised by the taste of this ice cream, as it was one I really enjoyed as did my family, I think this was largely due to the fact that there was lashings of the chocolate sauce, was was thick and gooey also fudge like and it was of such a good quality, none of the watered down stuff you can come across sometimes, this is what made this ice cream for me! The brownie pieces were very yummy to, bite sized and chewy a yummy treat to sink your teeth into in each bite.

If the chocolate was on it's own I have to say this wouldn't have done it for me, but the addition of the other flavours really made this ice cream. We have purchased this several times now add eaten it as is, on it's own, but have also used it to accompany desserts that are more on the plainer side and this had added such a great taste to these. If you are a chocoholic who loves ice cream, then this is something you should certainly try, it's pretty good!

She handed the tub to me and asked if she could get a vanilla one. When I checked she had hardly touched this. So I decided to finish it off. The chocolate sauce is deeply rich and has that slight bitter taste of cocoa. The balls of brownie were not too noticeable. I think because the chocolate ice cream and sauce combo hid the brownie altogether. It was a shame, but I think a vanilla ice cream with chocolate flake or something through it with the brownie balls and sauce would have been a better combo.

The overall chocolate flavour was could not be missed. But it was so rich, that you really couldn't eat too much. I couldn't finish the tub either, and it was a tiny tub to be eaten between 2+ people. I'm sure there will be fans of this, but I preferred the jam donut flavour a lot more.

They were giving away the small sized tubs of these at my local countdown last week for people to try and I grabbed one of these as did my daughter. I had seen them in the shops before but never thought about buying one. I was so glad to try it, it was a really great icecream which I would of loved to have more of after the little tub was gone.

The icecream is chocolate and there is a ton of chocolate sauce and throughout the icecream there is lots of little pieces of chewy chocolate brownie. It had the perfect amount of sauce they certainly didn't skimp on the sauce at all and I was completely satisfied by the amount I got. The taste is amazing so I will definitely buy it again. It's funny though my 1 year old who had never tried icecream before spat it out when I offered him some i'm sure that won't last though when he gets older.

The tub's are a lot smaller than regular tubs of icecream if you are buying for the whole family and at the same price you pay for the normal 2 litre tubs so it is definitely more of a treat icecream than an everyday one but definitely worth the money!!

Swiss Deli Delicatessen Liver Pate is prepared from liver of top quality New Zealand veal and pork. Seasoned with pepper, onion, ginger and parsley, this traditional ready-to-eat product is an ideal appetizer for any special occasion. It is best served spread on top of rye bread, as a sandwich filler or as a dip with ... more...