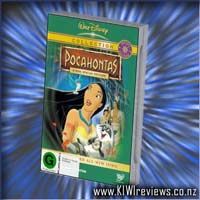 Disclosure StatementFULL DISCLOSURE: A number of units of this product have, at some time, been supplied to KIWIreviews by the company for the purposes of unbiased, independent reviews. No fee was accepted by KIWIreviews or the reviewers themselves - these are genuine, unpaid consumer reviews.
Available:
25th November 2004

The first Disney animated feature based on historical fact, "Pocahontas" tells the story of the meeting of the English settlers in Jamestown with the local tribe of Powhatan Indians. The adventurous young Indian woman Pocahontas, along with her constant companions, Meeko, a raccoon, and Flit, a hummingbird, visits Grandmother Willow, a counseling tree spirit, because she is uncertain about the path her life should take.

She soon meets the brave English captain John Smith, and while she opens his eyes to an understanding and respect for the world around him, the two fall in love. The other English settlers, led by Governor Ratcliffe, are intent on finding gold in the New World and become convinced the Indians are hiding the precious substance from them.

Thomas, an inexperienced settler, kills the Indian brave Kocoum, but Smith lets the Indians think he is responsible, so he is condemned to death. In begging her father, Chief Powhatan, to spare Smith's life, Pocahontas finds that her path in life is to be instrumental in establishing the early peace between the Jamestown settlers and her tribe.

Smith, however, is severely wounded by an enraged Ratcliffe and must return to England. Pocahontas and he part, each knowing their lives are richer for the love they share.

When I was a little girl my Dad would buy me all the new Disney movies on VHS and I had a pretty extensive collection. This was one of my favourite movies as a kid and I guess one of the things I liked was how strong a female character Pocahontos is. I actually didn't know it was based on a true story until reading the other reviews on the movie so don't actually know the 'true story' of Pocohantas to know whether this is a good re telling of it but I love the Disney telling of the story.

The DVD version is great so much clearer and better animation than the original VHS version but still the great movie with the great songs. I love the song of the Blue Moon it always gets me singing along to it and my daughter has sung that song as part of a school choir and it is such a moving song.

The storyline is great with Pocohantas living in an Indian village and some English settlers coming on land to try and find treasures. She falls in love with one of the settlers John Smith and he ends up protecting her. The captain of the ship calls them savages but John Smith sees differently and falls in love with the character of Pocohantas and does everything he can to protect her and her land.

I love the little character of Meeko the racoon which is Pocohantas constant companion. This is a real cute little racoon who adores Pocohantas. I think this movie is great and makes you appreciate nature and animals as it has that spiritual feel to it.

I guess it was a side effect of hanging around well-read history buffs, but I know the history of Pocohontas, as opposed to the sanitised version used in this movie. And it's quite a distinctly different story.

However, this version fits well with Disney's style of story: perky, musical, lyrical, enchantingly dinky and even comedic in places.

With their trademark high quality animation, stunning backdrops and crystal-clear soundtrack, this is yet another stunning production from Disney's animation studios. Add to that a star cast of vocal talent such as Irene Bedard, Judy Kuhn, Mel Gibson, David Ogden Stiers and even Billy Connolly, you have quality indeed.

Though a little TOO close to being classed as a Musical, It was good to just sit back and watch it again with my son, who flipped when he saw it slide out of the courier bag. For over half an hour he just would not shut up with his demands to watch it. In the end, I just had to put it on, just to get a moment's peace. :)

Overall, despite feeling that Disney corrupted a tragic true-life story and made it accessable to our children in a somewhat inaccurate format, I will happily conceed that this is a good kids movie, despite being almost a decade since it first hit the big screen. A remarkable job was done in remastering it for DVD format.

A variety of horrible poisonous spiders get exposed to a noxious chemical that causes them to grow to monumental proportions.