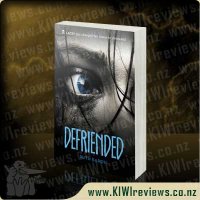 Disclosure StatementFULL DISCLOSURE: A number of units of this product have, at some time, been supplied to KIWIreviews by the company for the purposes of unbiased, independent reviews. No fee was accepted by KIWIreviews or the reviewers themselves - these are genuine, unpaid consumer reviews.
Available:
May 2013

It's the return of Point Horror for the internet generation! Don't open the door, Don't answer your phone. And, whatever you do, don't turn on your computer...Jason has met the perfect girl. OK, so maybe he hasn't actually met Lacey yet but they talk online all the time. Yet despite spending most nights chatting, Lacey refuses to meet up in person.

Suspicious, Jason starts googling, and his cyberstalking leads to a shocking discovery: according to multiple newspapers, Lacey died a year earlier. Soon, Jason finds himself enmeshed in a disturbing mystery. HAs he found a way to iChat with the dead? Or is someone playing a dangerous trick? Either way, Jason has to discover the truth before it's too late. You can't put up 'away' messages from beyond the grave.......

Selling Points
-Offers a refreshing alternative to the glut of paranormal romance
-The Facebook theme will appeal to tech savvy teens looking for timely scares.
-This series is poised to become a cross-channel hit!

The Truth About the Drug Companies
Rating: 9.5

This is one of those books that kept me guessing. Jason has been falling for a girl, only problem is that he hasn't met her in real life and she finds ways to say that they can't, eventually he turns to google only to discover she died a year ago, so what is going on?

As Jason pointed out, there are three potential reasons for this: Lacey is a ghost, it's a prank or Lacey, for whatever reason, faked her own death. I was pretty firmly in one camp, but there were a number of things that had me going back and forth on which of the three were actually true. I also didn't find this to be a horror but far more of a mystery book.

I didn't find the length of time it took Jason to google Lacey to be realistic, but that's cause I would have thought that he would start googling her a lot sooner ti find out as much about her as was possible.

This is a good read, though more a mystery than a horror, but good for passing away a couple of hours.

I really enjoy this style of horror read aimed at teenagers although my teenage years are long gone by there is something really readable about these books. This book did not disappoint although the first few chapters seemed a bit boring I still had to read as the mystery started right from the begin with the action not coming until much later.

I thought the storyline was great and is so relevant to young people today with the texting and facebook and online profiles. This book highlights the whole thing of not knowing exactly who it is your talking to online. Definitely really topical and makes you think twice. A lot of the music that is mentioned is modern and would be well known by young people today, although I didn't know who the Mountain Goats were and googled and really wish I hadn't. Really not my style of music but was the music of choice of the main character in this book Jason.

It was his love of that music that first got him connected with Lacey and so the online relationship began, only it wasn't Lacey he was talking to it couldn't be because Lacey was dead or was she. A mystery that keeps you guessing right to the end, was someone playing an evil trick, or was Lacey still alive and in hiding. Jason with the help of his good friend Rakesh and Lacey's good friend Jenna together solve the mystery with some interesting twists.

I would definitely read further books by this author as she has done a great job of writing a story that would appeal to the current generation of teenagers and she writes a good mystery giving just enough information about the characters to make you say hmmm, but keeping you guessing all at the same time.

It is a story that begins with a vivid depiction of the decline of the Roman Empire and which, down through the years, shows how one woman's determination to protect her daughter has such frightening consequences for mankind's future ... more...