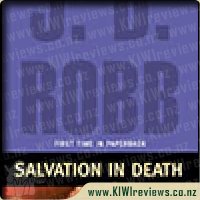 When Detective Lieutenant Eve Dallas confirms that the consecrated wine contained potassium cyanide, sheâ ™s determined to solve the murder of Father Miguel Flores, despite her discomfort with her surroundings. Itâ ™s not the bodegas and pawnshops of East Harlem that bother her, though the neighborhood is a long way from the stone mansion she shares with her billionaire husband, Roarke. Itâ ™s all that holiness flying around at St. Christobalâ ™s that makes her uneasy.

A search of the victimâ ™s sparsely furnished room reveals little-- except for a carefully hidden religious medal with a mysterious inscription, and a couple of underlined Bible passages. The autopsy reveals more: faint scars of knife wounds, a removed tattoo--and evidence of plastic surgery, suggesting that âśFather Floresâť may not have been the man his parishioners had thought. Now, as Eve pieces together clues that hint at gang connections and a deeply personal act of revenge, she believes sheâ ™s making progress on the case. Until a second murder--in front of an even larger crowd of worshippers--knocks the whole investigation sideways. And Eve is left to figure out who committed these unholy acts--and why

This is another of the books that just didn't quite hit the right note for me and so is at the bottom of the pile when it comes to the books that I do like from this series. Not sure why, but it may be the level of religious stuff in the book but either way, I just didn't find it that great a read and certainly didn't rush through it like I have others in the series.

A priest is killed, by poison, during Mass and once Eve gets on to the case she discovers that he isn't who he said he was. There is no master killer in this book, which can make a nice change, had I actually enjoyed the book.

We don't get to see much of the other characters in this book, though we do have the upcoming marriage of two of the characters and Eve's promise to be a part of it driving her to worry and concern about her work screwing things up.

Not a book that I am in a hurry to read again, but when I get to the point where I feel like reading the whole series through again, then it will get read then.

Ever wish you had a big and powerful flying robot for a best friend? Friendly robots can be fun! But with giant friends come giant responsibilities. In this book, the evil Victor Von Vulture and his army of Voodoo Vultures from Venus are about to take over planet Earth. Only the super-smart tricks of Ricky and his Mighty Robot can send the bad guys packing!