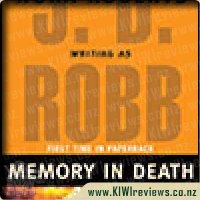 Eve Dallas is one tough cop. It should take more than a seemingly ordinary middle-aged lady to make her fall apart. But when that lady is Trudy Lombard, all bets are off. Just seeing Trudy at the station plunges Eve back to the days when she was a vulnerable, traumatized young girlâ"and trapped in foster care with the twisted woman who now sits smiling in front of her.

Trudy claims she came all the way to New York just to see how Eve is doing. But Eveâ ™s fiercely protective husband, Roarke, suspects otherwiseâ"and a blackmail attempt by Trudy proves his suspicion correct. Eve and Roarke just want the woman out of their lives. But someone else wants her dead. And when her murder comes to pass, Eve and Roarke will follow a circuitous and dangerous path to find out who turned the victimizer into a victim

This is one of my favourite books in the series, because it involves Eve's past but not the life with her 'father' but her life afterwards when she was in the system and living in foster homes as well as learning a little bit more about her determination to become a cop and help the dead.

It's just another day at work when one of her officers tells her that there is a woman waiting in her office, who she finds was her first foster mother, a woman who was another type of monster to the young vulnerable Eve. The rush of memories leaves Eve in a dark place and after dismissing Trudy she rushes home. After Trudy tries to blackmail Roarke, Eve decides they should talk to her, only to find she has been murdered.

Even though Eve has no wish to have anything to do with Trudy, now that she is dead she feels that Trudy is 'hers' and it is her job to stand up for her and catch her killer. As she hunts the killer down she learns more about Trudy and that Eve wasn't the only person that Trudy has hurt.

I really enjoyed this book and it is in my top 5 books from this series.

Can healing defeat the sword?

In seasons long past, twin gold-eyed princes sundered a kingdom. Rejecting his twin brother's warrior ways, Kasheron established a community deep in the southern forests. Forgotten by the outside world and protected by the trackless trees of Allogrenia, Kasheron's Tremen community has flourished, with his legacy of peace and healing upheld generations on.