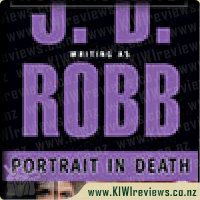 After a tip from a reporter, Eve Dallas finds the body of a young woman in a Delancey street dumpster. Just hours before, the news station had mysteriously received a portfolio of professional portraits of the woman. The photos seemed to be nothing out of the ordinary for any pretty young woman starting a modelling career.

Except that she wasn't a model. And that these photos were taken after she had been murdered. Now Dallas is on the trail of a killer who's a perfectionist and an artist. He carefully observes and records his victim's every move. And he has a mission: to own every beautiful young woman's innocence, to capture her youth and vitalityâ"in one fateful shot...

It is August 2059 and it is hot in the city. Eve catches a case where a killer kidnaps, kills and then photographs young college students. And while Dallas is off tracking down a murder, Roarke gets some information about his past and his family that knocks him off his feet.

J.D. Robb did a great job of making the victims extremely sympathetic. As I was reading, I actually felt sorry that these kids were dead. She painted a picture of people who were very vital while alive. Maybe it was because of their ages, but I think she made more effort in this book, than she has in others, to get you to really feel for the victims.

By far though the best bit of this book was Roarke learning about his past and how he then dealt with it. So far in this series, we've been watching as Eve learned bits and pieces about her past but there has never been a real mystery about Roarke as he thought he knew all he needed to. By far, his part in this book is part of what makes it as good a book as it does.

What's the only thing with more stuff in it than a Neanderthal's vomit?

This book, of course! It's not called the Book of Stuff for nothing. It's totally loaded with stuff. There's funny stuff and interesting stuff. Gross stuff and puzzling stuff. Plus heaps of stuff about dinosaurs and Neanderthals. Some of it's even true!