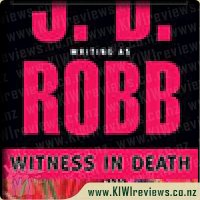 When a celebrity is killed right before her eyes, New York detective Eve Dallas takes a new place in crime - as both officer and witness to murder...

Opening night at New York's New Globe Theater turns from stage scene to crime scene when the leading man is stabbed to death centre stage. Now Eve Dallas has a high-profile, celebrity homicide on her hands. Not only is she lead detective, she's also a witness - and when the press discovers that her husband owns the theatre, there's more media spotlight than either can handle. The only way out is to move fast. Question everyone and everything...and in the meantime, try to tell the difference between the truth - and really good acting..

This book was a bit different, one of the witnesses to this murder was Eve and her abilities are put to the test. The murderer was revealed early (you just didn't realize it until nearly the end of the book) there were a lot of twists in the plot. There were also people who were used as smoke screens to try and throw some confusion into the story.

As usual there were flashbacks to Eve's past but not in detail like in the previous books and she is starting to wonder what happened to her mother and why she didn't protect her like most mothers would. This time the flash backs helped her feel for the suspect.

A developing romance between Peabody and McNab is proving to be entertaining and is helping establish them as people instead of just cops. It has taken a while but we are finally getting more information on the other characters.

Overall I am enjoying the books, each has slightly different stories and some books are touching on different topics but some things I am finding rather boring and repetitive. It is amazing how many different settings there are and how many reasons for murder.

Witness in Death, one of my least favourite book in the series. I have tendency to borrow one of the In Death series if I see it on the shelf at the library (and don't already own it) and if I see Witness in Death I don't grab it, I just didn't like it that much.

In Witness in Death, Dallas and her husband Roarke have gone to watch a play (not something Dallas really wants to be doing), but her interest in the night gets a lot bigger when, whilst on stage, one of the actors is stabbed with what was supposed to be a retractable stunt knife, and dies, right on stage in front of everyone.

I think, from memory, that it was the characters in the book that I didn't like, not our main continual characters, but all the actors etc in the book. There were things that happened to bring up feelings about Dallas and Roarke's childhoods, but it seemed a bit much and a bit of an overdose.

Whilst this was a completely horrible book, I didn't guess the killer till it was almost reveal time, it's just one of the books in the series I like the least.

Dragon blood and scales, dragon liver and eyes and teeth. All required ingredients for medicines with near-miraculous healing powers. The legendary blue dragon Tintaglia is dying of wounds inflicted by hunters sent by the Duke of Chalced, who meanwhile preserves his dwindling life by consuming the blood of the ... more...