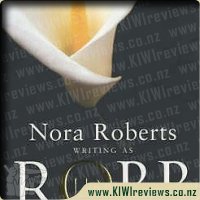 It is 2058, New York City. Lieutenant Eve Dallas uncovers a world where technology can create beauty and youth, but passion and greed can destroy them.

She was one of the most sought-after women in the world. A top model who would stop at nothing to get what she wanted -even another woman's man. And now she's dead, the victim of a brutal murder.

Police lieutenant Eve Dallas puts her life on the line to take the case when suspicion falls on her best friend, the other woman in the fatal love triangle. Beneath the faĂ§ade of glamour, Eve finds that the world of high fashion thrives on an all-consuming obsession with youth and fame-one that leads her from the lights of the runway to the dark underworld of New York City, where drugs can fulfil any desire, for a price.

I must admit to being slightly hooked on these books, the characters are very real, they have flaws and problems and we are slowly peeling away the layers to discover who they are and what makes them tick. We finally read the horrible story of Eve's past but I'm thinking that there is more to the story.

As usual there are murders to solve but what is linking them together and although I knew it wouldn't be the obvious answer I was still caught by surprise at who it was but once I knew the who then the why became obvious. I like how the story is easy to follow and there is not a lot of fanciful future technology so you aren't lost in trying to keep up with the changes in technology.

Thanks to Ms Roberts for such a good read, would recommend to anyone who really likes a good crime to solve with strong characters.

Dallasâ ™s team is expanded beyond the usual peopleâ"namely, Feeney, she pulls in Peabody, (a cop she took a shine to in the last book) and finds herself stuck having to cooperate with a cop from another department. This time though, her best friend Mavis is the suspect in a murder case, along with this Dallas is also juggling with her upcoming wedding day.

In this book we get a clear picture of what led to Dallas being found when she was a child. The flashbacks were hard to read and J.D. Robb pulls no punches with the truth of Eveâ ™s situation. We are faced with the grim and horrifying truth up close and personal. Character development continues, making this a good series as the characters are always changing and growing.

There were quite a few amusing scenes in this book. Eve is forced out of her comfort zone to help cheer Mavis up and to prep for the big day. And there are some heart-wrenching stuff as we have more details of Dallas' awful childhood.

As for the murders... We are introduced to new drugs and some nasty characters. Looking forward to reading the rest in the series.

Score: 10.0
Product reviews for listing 7028: Mark of the Thief
Written by: Jennifer A Nielsen

When Nic, a slave in the mines outside Rome, is forced to enter a sealed cavern containing the lost treasures of Julius Caesar, he finds much more than gold and gemstones. He discovers an ancient bulla, an amulet that belonged to the great Caesar and is filled with a magic once reserved for the Gods - magic some Romans would kill for. Nic must harness the magic within himself and defeat the empire's most powerful and savage leaders