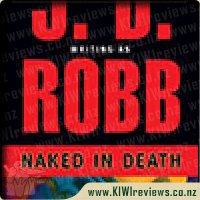 It is the year 2058, and technology now completely rules the world. But New York City Detective Eve Dallas knows that the irresistible impulses of the human heart are still ruled by just one thing - passion.

When a senator's daughter is killed, the secret life of prostitution she'd been leading is revealed. The high-profile case takes Lieutenant Eve Dallas into the rarefied circles of Washington politics and society. Further complicating matters is Eve's growing attraction to Roarke, who is one of the wealthiest and most influential men on the planet, devilishly handsome... and the leading suspect in the investigation.

Book #1 in the In Death series

I do enjoy a good crime drama and this book delivered, you start off right into the scene and I was hooked from halfway through page 1 and I didn't want to put the book down and had a very late night as I wanted to see who the murderer was, I definitely didn't expect the murderer to be who it was.

I love the strong characters, there were some really good ones. I really hope that Roarke stays in the series as he seems to understand and balance Eve's character out. It is easy to see that the story is taking part in the future but it still has the same sort of problems and issues that are part of everyday life.

I am going to be reading the rest of the series and hope that it stays as good and page turning as the first book.

Naked in Death is the first book in the long series of In Death books written by J.D. Robb (better known as Nora Roberts). We follow Lieutenant Eve Dallas of the New York Police Department, a woman who remembers little of her childhood but strives to bring justice to a victim no matter who they are.

Dallas is brought onto the case of a murdered senator's daughter and must deal with the issues of politics that come up in the case, whilst trying to stop a killer before the body count rises. Along the way she meets Roarke, someone who got to where he is by treading in the grey areas of the law. Against all sense she begins to fall for him, yet this complicates things as he is also a suspect in the murder cases.

I really liked this book and the characters created in it. Dallas has a dark past, that she'd rather forget about but is already starting to be forced to deal with it. She's a strong woman with a little bit of vulnerability and scared to feel too much. Dallas is a kick-butt kind of character and I like that.

To the consternation of the Patrician, Lord Vetinari, a new invention has arrived in Ankh-Morpork - a great clanging monster of a machine that harnesses the power of all of the elements: earth, air, fire, and water. This being Ankh-Morpork, it's soon drawing astonished crowds, some of whom caught the zeitgeist early and arrive armed with notepads and very sensible rainwear.