« The Nightmare Before Christmas review

ProdID: 4337 - Death at a Funeral
Directed by Frank Oz 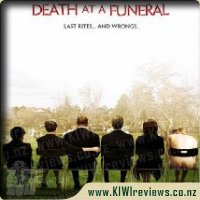 Death at a Funeral product reviews

A dignified send-off for a loved one erupts into uproarious chaos when romance, jealousy, in-laws, hallucinogens, dark secrets, life-long yearnings and a spot of bold blackmail all collide graveside in the irreverent British comedy, Death at a Funeral. Directed by Frank Oz and featuring a cast made up of the cream of Britain's crop, the film mischievously explores what happens on the day when a typically divided family is finally forced to come to terms with each other's bad behaviour, outrageous faults, skeletons in the closet and all.

On the morning of their father's funeral, the family and friends of the deceased each arrives with his or her own roiling anxieties. Son, Daniel knows he will have to face his flirty, blowhard famous novelist brother, Robert, who's just flown in from New York, not to mention the promises of a new life he's made to his new wife, Jane.

Meanwhile, Daniel's cousin, Martha and her dependable new fiance Simon are desperate to make a good impression on Martha's uptight father - a plan that literally goes out the window when Simon accidentally ingests a designer drug en route to the service, leaving him prone to uncontrollable bouts of delirium and nudity in front of his potential in-laws.

Then comes the real shocker: a mysterious guest who threatens to unveil an earth-shattering family secret. As riotous mayhem and unfortunate mishaps ensue on every front, it is now up to the two brothers to hide the truth from their family and friends and figure out how to not only bury their dearly beloved, but the secret he's been keeping.

A movie that starts with the credits following the route of the hearse, reaching the house and they've brought the wrong body! If all I had seen in the trailer was those first couple of minutes I would still have gone to see Death at a Funeral.

Death at a Funeral takes place on the day of the funeral Daniels father but while he is trying to make it a dignified send off, especially for his mother, everything seems to be going wrong. There is a big cast of actors in this film, each has their own issues going on, and it all comes together to make an utterly hilarious movie.

When I saw this at the cinema I was in fits of laughter for almost the entirety of the movie, there wasn't a dull moment and when it came out on DVD I had to buy it. Since then it has been a firm favourite in our house and we have watched it at least a dozen times.

If you like comedy and you like British humour then watch this, there is so much going on in this movie but it doesn't feel overcrowded. It's a movie that I know I'm going to be enjoying for years to come.