ProdID: 4315 - The Man Who Sued God
Directed by Mark Joffe 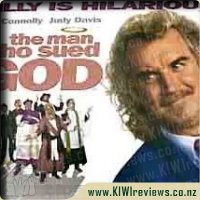 Directed by Mark Joffe, Australia's The Man Who Sued God centers around Steve (Billy Connelly), an ex-lawyer who is unable to collect insurance money for his destroyed boat.

Deeming the accident an "act of God," Steve decides to sue the man at the root of his problem - namely, God. Anna (Judy Davis), a jaded journalist who took a particular interest in Steve's case, decides to help him out on his quest to collect from the almighty.

The movie raises a host of philosophical issues, some of which include who should represent God in court, who pays up should God be convicted, and the status of Steve's eternal soul. The Man Who Sued God also features Vincent Ball and Billie Brown

The Man Who Sued God... Steve's boat gets hit by lightening and when he calls up the insurance company he is told that it comes under an act of God and therefore insurance will not pay out. Steve in turn decides to sue God himself and thus ends up in the middle of a debate about who should represent God in court etc. etc.

The first couple of times you watch this there are a good amount of laughs and it is a fun movie. The only problem is that after you've seen it a couple of times you remember the jokes and so they're no longer that funny. I watched this recently with my husband, who hadn't seen it yet and he found it really funny but I didn't enjoy it as much as I had the first time that I had seen it.

Suing God, I wonder how many people have actually thought about doing this, and if any have tried then it obviously got kicked out of the courts pretty quickly. This is a nice enough movie the first couple of times, but really only worth one watch, twice at the most.