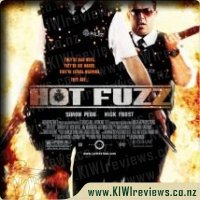 Top Police Constable, Nicholas Angel (Simon Pegg) is good at his job, so good in fact, he makes everyone else look bad. As a result, his superiors at the Met have decided to sweep him under the carpet. So it is that London's top cop finds himself in the sleepy West Country village of Sandford.

With garden fêtes and neighbourhood watch meetings replacing the action of the city, Angel struggles to adapt to the situation and finds himself partnered with Danny Butterman (Nick Frost), an oafish but well meaning young Constable. Just as all seems lost, a series of grisly accidents motivates Angel into action.

Convinced of foul play, Angel realises that Sandford may not be as idyllic as it seems. With his faithful new partner in tow, Angel fights to prove his instincts are correct and uncover the truth about Sandford. Is Angel simply losing his mind in the safest, sweetest village in Britain- Or is something far more sinister at work- Whatever the truth, Sandford is about to get a lot less sleepy.

When I saw this advertised at the movies I knew it was something my husband and I could enjoy. We tend to watch a lot of English comedy. As far as movie comedy, Simon Pegg and Nick Frost are always on key for some painfully funny good times. I think if you liked Shaun of the Dead or even Paul, this movie could be one for you.

Simon Pegg plays a straight laced cop who is awesome at his job. It's obvious he likes to live on the edge too. He gets everything he needs out of life, in his high power, high risk job as a policeman. But then he is sent to a little village on a transfer. There he meets Frost's character, who plays the loveable bumbling policeman. But he longs for the excitement too and Pegg becomes the number one hero and new best friend for him.

I must admit I was quite surprised by the ending of the movie. I was not expecting things to quite go the way they did. I'm not sure I enjoyed it and it came too abruptly as well. It was almost like they had written all these great jokes and then found they needed to wrap things up. Lots of blood and gore, which my husband was chuffed with. Me not so much, but the rest of the film was brilliant. Something for us both I guess!

Constable Nicholas Angel is one of the best police officers that you will find, the only problem is that he is do good and outshining his fellow cops in London that he is sent to a sleepy little town where the biggest thing to happen is a swan on the loose. Whilst there he becomes friends with Danny Butterman and find something much more sinister is going on.

This is one of those movies where you want to listen to everything that they say, or try to at least, as this duo really churns out the jokes and other film mentions. This is a laugh a minute kind of movie with plenty of action involved in it too. This has a good balance in it and is a film that both myself and my husband enjoy.

If you have enjoyed movies like Shaun of the Dead and Paul then I highly recommend Hot Fuzz it has some great laughs and plenty of cameos, movie references etc. My only suggestion is that you stick to the PG 13 rating as the deaths aren't child friendly.

Shortly after midnight on Sunday 2 September 1666 a fire started in a London Bakery on Pudding Lane. This inferno burned its way into history as the Great Fire of London, raging for four days and bringing the Capital City to its very knees. Cathedrals, shops, inns were all lost and 70,000 of the City's 80,000 inhabitants were made homeless.

The Great Fire brings that history to vibrant life through the eyes of the people on the ... more...