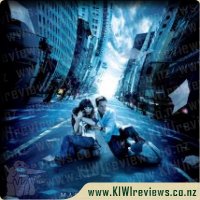 We've Sensed It.
We've Seen The Signs.
Now... It's Happening.

It begins with no clear warning. It seems to come out of nowhere. In a matter of minutes, episodes of strange, chilling deaths that defy reason and boggle the mind in their shocking destructiveness, erupt in major American cities. What is causing this sudden, total breakdown of human behaviour? Is it some kind of new terrorist attack, an experiment gone wrong, a diabolical toxic weapon, an out-of-control virus? Is it being transmitted by air, by water... how?

The latest blockbuster from acclaimed director M. Night Shyamalan (The Sixth Sense, Unbreakable) is the terrifying psychological thriller The Happening, about an unexplained wave of shocking deaths spreading across America.

For Philadelphia high school science teacher Elliot Moore (Mark Wahlberg) what matters most is finding a way to escape the mysterious and deadly phenomenon. Though he and his wife Alma (Zooey Deschanel) are in the midst of a marital crisis, they hit the road, first by train, then by car, with Elliot's friend Julian (John Leguizamo) and his 8 year-old daughter Jess (Ashlyn Sanchez), heading for the Pennsylvania farmlands where they hope they'll be out of reach of the grisly, ever-growing attacks. Yet it soon becomes clear that no one - and nowhere - is safe.

The underlying idea was an interesting one. Plants releasing a toxin that causes people to commit suicide. Quite a dark plot, if I was being honest, and not the sort of film that you would want to watch with certain people. An entire movie, that effectively shows large groups of people committing suicide in gruesome ways, whether it be, walking off of scaffolding, hanging themselves, lying down under a ride-on lawnmower, even climbing into a lion's den and taunting the giant cats into eating them.

The actual physics and visuals of it however, looked absolutely ridiculous. People running away screaming when the grass starts to shake and wave in their direction. But here you have that occurring. A family separated, trying to escape to safety to reunite. Mark Wahlberg again is present using his skills at looking angry and confused as he figures out that the grass doesn't like big groups, and he splits from other survivors, again and again as the plants become less and less tolerant, until even one person sets it off.

This film was only enjoyable if you were after a laugh. Watching Wahlberg running for his life away from the grass is certainly one way of getting a good chuckle in.

The Sixth Sense was a wonderful movie but since then Shyamalan seems to have lost the plot when it comes to his movies resulting in some, well... crap movies and this is one of the worst.

You have the typical couple who are having relationship issues, throw a child into the mix that they end up having to protect and care for and people killing themselves in the hundreds and you have this truly bizarre movie that really should have never been made.

Some of the special effects are ok, greatly needed for all the death scenes but the whole premise of the movie is just pathetic and one of the worst I have ever seen. So many plot holes and bits that just don't make any sense like everyone around you frozen but the one person you need to view all the horror. And then near the end, seriously, it wasn't air-tight!

This was a movie that had me laugh far more than it should have, especially the fleeing scenes.

The premise of this story is quite a good one. Something is causing people to cause themselves harm. Everyone freezes and then does something to commit suicide. On the run, trying to survive are Elliot, his wife Anna and his friends eight year old daughter Jess.

This, well, wasn't that good a movie, too many problems, and not enough things to help it out. The first, is everyone freezes, literally everyone in the close vicinity, and yet one person doesn't so that you have a good reason to pan around?? Then there is the, um, horrifying thing that are fleeing (and I don't mean horrifying in a good way).

This has to be one of the worst horror movies I have seen, yes, the death scenes are far from pleasant, but the end result and what they realise they are running from... Sorry, but I can't take this film seriously.

Score: 9.3
Product reviews for listing 5260: A Case of You
Directed by Kat Coiro

Young writer Sam (Justin Long - He's Just Not That Into You) has a crush on Birdie (Evan Rachel Wood - The Wrestler), the cute and quirky barista at his local coffee shop. When his conventional attempts to woo her crash and burn, he takes his efforts online, creating an Internet profile embellished with all of the details that would make him Birdie's dream guy: ballroom dancing, rock climbing - a seemingly endless, escalating series of ... more...