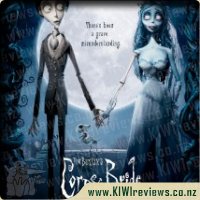 Set in a 19th century European village, this stop-motion, animated feature follows the story of Victor, a young man who is whisked away to the underworld and wed to a mysterious Corpse Bride, while his real bride, Victoria, waits bereft in the land of the living.

Though life in the Land of the Dead proves to be a lot more colourful than his strict Victorian upbringing, Victor learns that there is nothing in this world, or the next, that can keep him away from his one true love.

Another dark, gloomy, and sombre Tim Burton movie. While I immensely enjoyed The Nightmare before Christmas, and had no issue with James and the Giant Peach, this Corpse Bride stop-motion movie lacked the excitement, vitality, and pizzazz, of the previous films. Another film that explores the afterlife. But instead of having cheerful but evil musical numbers, this film was far more mournful and haunting, and not really my cup of tea.

The colours that you see in the DVD cover represent the theme of the film, with dark, cool hues throughout. The stop-motion is far improved from its predecessors, more fluid, and makes for an easier watch, but the plot was not really all that interesting for me; with the main character having to choose which woman he will make his bride.

As with most Tim Burton films, the lead character was soon accompanied by his faithful dog companion, who is pretty old, but nevertheless helps the character throughout the movie. and provides a nice distraction from what I would consider an otherwise dull watch. I really had low expectations for this film, so I wasn't surprised that I didn't love it. I would recommend watching it on television, before you considering purchasing it.

Johnny Depp and Tim Burton, a combination that I always enjoy, so when I saw the trailers for Corpse Bride I knew that it was a movie that I had to see, absolutely had to see. I've always enjoyed this type of animation as well, so much time and dedication to it.

Victor is a young man who is about to get married to young Victoria, someone who he has only just met and their marriage has been arranged as each of their parents is dirt poor and believes the other to be rich and doing well. However the night before his wedding Victor freaks out, and unwittingly promises himself to the Corpse Bride.

This has some nice music on the soundtrack and one quite fun song sung when Victor first wakes up in the world of the dead. Victor is a great character who must decide between trying to get back to the woman he feels he could love and staying with the woman he unwittingly promised to marry.

A great film, which may be scary for younger viewers, is a good family film.

Get Ready For A Wiggling Good Time.

The Wiggles have become one of the most popular and successful performing acts in Australia, in any age group. Now in their tenth big year, the Wiggles continue to entertain more and more children around the world. With over 80 minutes including 7 new songs!