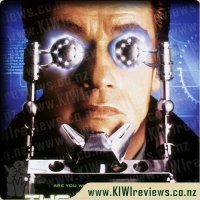 Are You Who You Think You Are?

In the world of the very near future, cattle, fish, and even the family pet can be cloned. But cloning humans is illegal - that is until family man Adam Gibson comes home from work one day to find a clone has replaced him. Taken from his family and plunged into a sinister world he doesn't understand, Gibson must not only save himself from the assassins who must now destroy him to protect their secret, but uncover who and what is behind the horrible things happening to him.

Another controversial film, cloning is the factor under scrutiny. In this day and age, animals have been cloned, and human body parts can be cloned with imperfections removed, but nobody has cloned a full human yet. That is mainly because it is illegal, and would create many loopholes in regards to responsibilities when crimes are taken into consideration.

But Adam Gibson, played by Schwarzenegger, has found himself resorting to cloning to save his family the mourning of a family pet that passed away. But upon returning home, finds he is already there.
Suddenly abandoned, and facing a clone who has taken over his rightful place in the family, Gibson sets off to solve the mystery, and take his family back.

Another film that presents a good number of satisfying twists, I was greatly entertained. Not overly flashy, this film brings to light the ethical implications of cloning, in the guise of an action film. There are other technologies are introduced, such as tech that offers someone the ability to see through another persons eyes, and creates another barrier to Gibson as his every move is documented to those that he is trying to bring down.

The 6th Day is a classic film with a moral that still stands true to date.

Set in the not too distant future, cloning happens on a daily basis, however, it has been made illegal to clone human beings for various reasons. Adam Gibson (Arnold Schwarzenegger) hates clones, but after the family dog dies he decides to get it cloned, however, upon returning home he finds himself already inside with his family! Adam must now find out why he has been cloned, who is out to kill him and how to get out of the mess he has found himself in.

Special effects are well done in this film, after all at least 70% of this film uses special effects and it all flows wonderfully. This was done well enough that it still looks good today and is still an enjoyable movie overall.

If you like Arnold Schwarzenegger then I'm pretty sure that you'll enjoy this film, he does do a great job and I think that it is one of his best movies. It's a great look into the world of cloning and one that could be totally realistic in the future.

Henry is resurrected from death with no memory, and he must save his wife from a telekinetic warlord with a plan to bio-engineer soldiers. He is helped by a mysterious stranger who apparently can't be killed, for long.