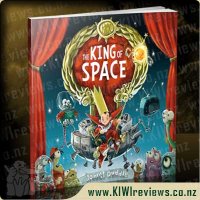 Disclosure StatementFULL DISCLOSURE: A number of units of this product have, at some time, been supplied to KIWIreviews by the company for the purposes of unbiased, independent reviews. No fee was accepted by KIWIreviews or the reviewers themselves - these are genuine, unpaid consumer reviews.
Available:
May 2013

The King of Space product reviews

We LOVE this book! We have read a couple of Jonny Duddle's other books which are big hits in our house so I was excited to read this latest book 'The King of Space.' Whilst I initially thought this would probably appeal to boys more because it is space and invasion themed my Miss Five loves it. We have read it every night this week and then she will spend ages just looking at all the illustrations and "reading" it to herself. The illustrations are fantastic. They are very detailed pictures and absolutely hilarious (especially when teemed with the story).

The story is about Rex a six year old who decides he wants to be The King of Space and comes up with a plan and with the help of his friends creates the space craft and machines to try to take over the galaxy. He finds himself a bit over his head though and has to fess up to Mum and Dad who sort it out for him leaving him to come up with an even better plan!

This is a bit hard to read out loud as there is the written story but then also the comic style speech bubbles and illustrations so it can take a long time to read it all. I do with Miss Fives permission sometimes skip some of the speech bubbles and just condense the story. This story is so funny and I love the imagination of Rex and the theme of being whatever it is that you want to be. Believe in yourself!

Miss Five and I would give this book a 10/10 as we both really love it. I would recommend this for probably ages 4 and up but more so for 5 years and up as then your child can start to read this themselves. With all the speech bubbles etc it is a great book to get boys interested in reading and I wouldn't hesitate to buy this as a gift for any boy age 4 - 10 years or any girls who loves aliens and space themes.

My daughter selected this book today for her bedtime story. She liked the look of the cover. Rex, is the main character, and he sits regally on the front cover which proclaims him to be "The King of Space". It is very theatrical with the heavy red curtains and the TV and aliens all looking on at Rex. This made me wonder if the book was about a child who is in a play, or if its all going to be make-believe.

All the way through the book, there are little notes and fun illustrations that add to setting the scene. I had a little giggle at the love notes, and the blue prints. As I read out the blue prints for the warbot that Rex designs, my daughter was saying "owwww!". Rex's weapons involved dung, which she thought was yucky.

The storyline is pretty funny, we talked about Rex and his behaviour. Was it good or bad? Was he being a good friend? I identified with his parents in a lot of ways, while my daughter just enjoyed the whole concept of his lust for power. I loved that he was so into being the King of Space and conquering the Universe, but no one was allowed to tell their parents. Such a kid way of looking at it. Its also laid out like a comic book in places, which breaks the story up and helps you to see the progression. It is quite a lengthy read, but it is enjoyable.

The illustrations are really neat. They reminded me of the whimsy of a Donovan Bixley, but the lines in these drawings aren't quite as clean. They look and feel hand painted rather than digitally rendered. My daughter was fascinated by the teacher Miss Brain and the alien children with multiple eyes, and strange bodies.

In Whacker McCracker's Cafe we first met the utterly original ex-Auckland businessman who escaped his five predatory ex-wives by moving to Waiheke Island to open a simple little cafe and start a new life. Whacker's hilarious first year on the island created colourful mayhem - but that was nothing compared to what happens when his eccentric aunt moves to Waiheke from Gore and buys a new vineyard. For her piggery...