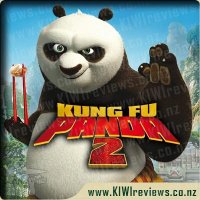 We completely missed Kung Fu Panda when it was at the theatre and hadn't seen it at all. But when Kung Fu Panda 2 came out, we were watching the trailer and were keen to see it. I'm not a huge Jack Black fan, but my daughter loves animals and I must admit that some of the jokes in the short were funny.

Because we hadn't seen the first one, some of the background story was lost on us. But I don't think that mattered too much. We knew that Po was the Panda and that he was a bit different discipline-wise to his 5 companions. We also got to learn his backstory, as to why he has a Crane for his father.

For me the peacock and his posse were a lot of fun, as was the old shaman type character. Po is heroic and grows a lot through the movie. Friendship and self belief are big themes in this film. I really liked that the past in the end didn't really matter too much. For many children, where they come from could be a difficult truth. Having the character embrace the family he has and the friendships he gained was great.

The animation was really good quality. I enjoyed all the animals and how they took on human characteristics. My daughter enjoyed this so much that we had to get it for home as well. We have watched it a couple of times since and it is very entertaining still.

When I went and saw this at the movies, it quite literally was an accident. I'd gone along to the Watties Can Film Festival, taking my then 4 year old and my mum and from the movies listed I thought that I was going to be watching the first Kung Fu Panda movie, not that that was a bad thing.

Kung Fu Panda 2 follows Po and the Furious Five as they face a new foe, Lord Shen, a peacock who has evil plans for fireworks. Having not even seen the trailer I went into this film blind and was simply blown away. It was a fantastic movie, I loved Shen's fighting style, the banter between Po and the Furious Five, and I actually found it to be a far better film overall than the first one.

My favourite thing about this movie would have to be the character development for Po and discovering where he comes from and how he ended up in the Noodle House, and who your family is.

Kung Fu Panda 2 is a great film, one of the best animated movies I've seen with the perfect mix for the entire family.

Score: 8.0
Product reviews for listing 8234: Sorry To Bother You
Directed by Boots Riley

In an alternate present-day version of Oakland, black telemarketer Cassius Green (Lakeith Stanfield) discovers a magical key to professional success, which propels him into a macabre universe of "powercalling" that leads to material glory. But the upswing in Cassius' career raises serious red flags with his girlfriend Detroit (Tessa Thompson), a performance artist and minimum-wage striver who's secretly part of a Banksy-style activist ... more...