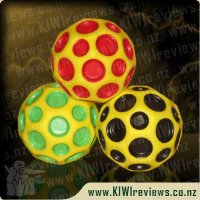 A small step for Waboba, a giant bounce for mankind. The Moon Ball just may be the most extraordinary ball to hit the ground in the history of the universe. And now, you have the power to bounce it out of this world! Well almost.

We didn't want to make it bounce so high, it would knock the real moon out of the universe. The Moon's crazy, gravity-defying features will turn a routine game into an out of this world free-for-all on a playground, skate park, gym court or basement! Get ready to expect the unexpected.

What a cool ball! When I was asked if I could take this on because someone else had "dropped the ball" I was really pleased to help out. I wasn't sure at all if I could do a review on something so lo-tek but it was worth a try. I grabbed my little brother in to help me on this one, since this is more aimed at his age grouping than mine.

When it arrived, I have to admit I was surprised. I wasn't expecting something so strange to be so good. As I opened the box it fell out and bounced back almost as high as the box. I'm no science nerd, but even I know that a ball that bounces back to almost the same height as it was dropped from is really good at storing and releasing energy with little to no loss. That's some serious engineering there, so we had to give it a try down at the local park.

At first I thought I would drop it from the top of the tall climbing frame, about 6m from the ground, but recent safety improvements now have the ground around the tower dug out and filled with shredded recycled tyres or something. Not the best surface to test a bouncy ball on. So instead we headed home after a couple of hours of playing of throw and catch games. This ball really was easy to grip, making for very accurate throws. it was also comfortable to catch, being fairly firm to grab and the rubber means it grabs the skin on your hands really well, even when they are wet.

When we got home, I talked my Dad into letting me drop this out of the 2nd floor windows of his room, so I could bounce this off our driveway. After he made me put up some sheet board to protect the front windows, I leaned out the window and dropped this from 3.5m. I was expecting it to bounce back no higher than about 2.8m but I was really impressed when I was able to grab it at the top of the first bounce! I had to lean down a bit, but that ball lost no more than about 20cm in bounce height! Some seriously good elasticity there!

I took it to uni with me the following Monday and asked one of the physics professors if they would like to have a look. After explaining what I saw they ran some tests on it and confirmed this ball is, in scientific terms, "pretty amazing, really!" They couldn't decide if it was the material it was made of, or the ridges and cellular structure that gave it such a great energy efficiency, but everyone agreed it was just cool. I expect to see the local toy stores selling out of these when or if they get them in, because by the end of the day I had fended off at least a dozen requests to "borrow" it. (I know that if I had lent it out, I would never have seen it again.)

One word to describe this ball: Impressive.

When I first saw this ball up for reviewing, I jumped at the chance my son (3years) would fall in love with this. When it arrived, I opened the box it came in and thought it was very small. I thought it would be bigger, but my son took it and ran with it, rolling it and playing with it. When I finally got a turn I went into the kitchen and bounced it and boy did it bounce, nice and high too. My son took it again knowing how well it bounces and had a blast with it, he thought it was funny going into the sink, but then played with it close to the ground and had lots of fun with it.

The size is great for small hands and the ball itself is different which makes it stand out from the other balls, it doesn't roll away from the kids which they like but it does roll around and they love the bouncing aspect of it. Of course taking it outside to bounce works well too.

The colours are nice and I love how they go well together, the red and yellow.

Everyone was excited when they saw this strange looking ball I bought home. The Moon Ball is not a sphere but a multi-sided shape with crater-like indents. As the weather was not conducive to outdoor play my children had lots of fun rolling it around on the carpet. They know better than to throw or bounce a ball inside. Their father was a different story. He asked me if these balls could bounce. Before I had a chance to answer he bounced on the kitchen lino and it nearly hit the light. "Yes my darling. It does have a great bounce."

My daughters and my carekids have had a great time with this ball. The younger ones (just turning two) found the shape of the ball very easy to grasp in their small hands as the dimples provided finger holds. As it is less than a perfect sphere it rolls slowly and making it easier for them to get. The four year olds have found it is great fun to bounce it while they are on the tramp. It is unpredictable where the ball will end up when young kids and a trampoline are involved so having someone to the ground to chase the ball is a must.

We also had fun being creative with the moon ball. We pressed it into the playdough but found it was more fun to roll it through the dough. We also rolled it through paint and then rolled it over paper. The craters on the ball created some great effects which had the kids wanting to go more. They were disappointed when they tried the same things with a regular ball.

The only problem I had with the ball was purely cosmetic. The black paint in the crater lifted and the children picked it off. This didn't stop the children from enjoying it. It has been so popular I need to get more so they aren't arguing over it.