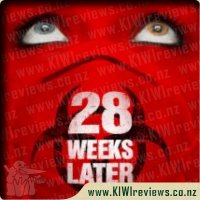 Six months after the rage virus was inflicted on the population of Great Britain, the US Army helps to secure a small area of London for the survivors to repopulate and start again. But not everything goes to plan.

The sequel to the hit 28 Days Later follows two young children as they return to zombie ravaged London. An area has been cordoned off and zombie free. People are slowly returning to the UK in an attempt to restart life as the zombies have starved to death. Naturally, this chance at a new start doesn't last long before zombies are on the rise again.

This one is a little bit more nerve-wrecking than the first as this time you are following two young children, who in essence, are the symbol and hope for a new start at civilisation, certainly in the UK. But, it still wasn't particularly scary, at least not to me, but it still had some nasty gory scenes and plenty of tension as you had fingers and toes crossed for these plucky kids.

This was, in my opinion, a better film than the first, which isn't something you can say about a lot of sequels, and I hope the writers, directors etc manage to agree upon things and make 28 Months Later.

In the dark action comedy The Family, a Mafia boss and his family are relocated to a sleepy town in France under the Witness Protection Program after snitching on the mob.