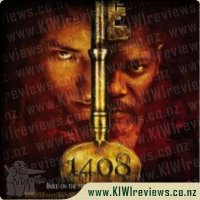 The Dolphin Hotel invites you to stay in any of its stunning rooms. Except one.

Based on the short story by Stephen King, 1408 tells of renowned horror novelist Mike Enslin who only believes what he can see with his own eyes. After a string of best-sellers discrediting paranormal events in the most infamous haunted houses and graveyards around the world, he scoffs at the concept of an afterlife. Enslin's phantom-free run of long and lonely nights is about to change forever when he checks into suite 1408 of the notorious Dolphin Hotel for his latest project, "Ten Nights in Haunted Hotel Rooms."

Defying the warnings of the hotel manage, the author is the first person in years to stay in the reputedly haunted room. Another best-seller may be imminent, but like all Stephen King heroes, Enslin must go from sceptic to true believer - and, ultimately, survive the night.

"We've Only Just Begun" is a lovely song by The Carpenters yet 1408 has done a great job of involving this song in the film in such a way that now whenever I hear this song, all I can think of is the movie 1408 (which for me, hearing the song late at night, would not be a good thing) so obviously I tend not to listen to it that often now.

1408 is based upon Mike who writes books about various haunted hotels etc who one day receives a postcard informing him of room 1408 in the Dolphin Hotel. Despite the manager doing his best to convince Mike to stay the night in another room and then write his story Mike refuses and is adamant that he must stay in 1408 to give an accurate story for his fans. But can he survive the night?

Naturally, the film takes a little bit of a build up, but once it gets into the room and Mike on their own it really steps up its pace. This isn't your average haunted room and it really throws a lot at Mike using both the past and present to attack him. The special effects in this are fabulous and it is an all around scary movie. I didn't find that it gave me much cause to jump, it was more the psychological side of it (which I can't speak of due to spoilers).

It's a good film, one of the few horror films that I think very well written and John Cusak does a wonderful job of holding the film up predominantly on his own, though the room plays its role brilliantly too.

Academy Award Winners Meryl Streep and Julia Roberts star in the darkly hilarious and deeply touching story of the strong-willed women of the Weston family, whose lives converge when a family crisis brings them back to the Midwest house they grew up in, and to the dysfunctional mother who raised them.