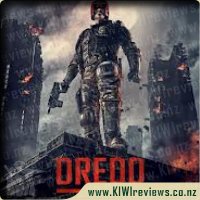 In a violent, futuristic city where the police have the authority to act as judge, jury and executioner, a cop teams with a trainee to take down a gang that deals the reality-altering drug, SLO-MO.

I enjoyed this film, surprisingly. The film has a very limited plot, which involved Judge Dredd (played by Karl Urban) and a rookie getting trapped in a building full of criminals, unable to get help, and well... they need to survive.

I have only read one Judge Dredd graphic novel to date, but I do have to agree that this film embodies it pretty well. With the ability to arrest, sentence and execute on the scene, there is little more to a Dredd movie than gore, and death with some fancy guns. The environment suited the plot; it looked like a drug-addled slum, and the criminals had little to no regard for human life.

The only thing that I really felt was off, was the uniform. Whether it was Urban's body shape, or head shape, it just didn't feel right, and I couldn't shake the feeling for the entire film. I almost wished that he would take off the helmet.

All in all, I was looking for a bunch of blood splatter, with minimal dialogue. That is exactly what you get. Hopefully, the rumours of a sequel are correct, and we can explore the world of Mega-City One, outside of that one high-rise.

The world has been to hell and back and now 500 million people live in once confined area. To keep everything under control and in order you have the Judges. These men and women are judge, jury and executioner all in one job and as such show no mercy should a criminal choose not to be arrested. Enter Judge Dress who the same day he takes on a rookie, arrests someone very important to the mega baddie Ma-Ma and so war begins between her gang and our two judges.

His is a good film to watch if you like a film that has fighting, shooting, blood and very little in the way of story or character development. Yes, the special effects are quite good, there is a drug that slows things down and so you get some funky slow motion scenes, this doesn't really help the film as you need more than that to make it something worthwhile.

The plot and characters.... Well, plot... Not really much of one, it's just a ''let's get the heck out of here'' type film and that is it. Nothing is really delved into and the characters are very, very,one dimensional. There is almost no character development at all, and sadly Karl Urban doesn't seem to do that great of a job, there's very little that Dredd needs to do other than kill.

My husband enjoyed this film more than I did, but he wouldn't buy it unless it was under $10. I think this could have done a hell of a lot better, but whilst I am curious about the world in this film, I really hope they don't make a second film.

Score: 9.8
Product reviews for listing 1146: Over the Hedge
Directed by Disney DVD

Taking back the neighbourhood... One snack at a time.

Spring has sprung and Verne and his woodland friends awaken from their long winter's nap to discover that a tall green "thing" has mysteriously cropped up right through the middle of their home. Enter RJ, an opportunistic raccoon, who explains that the world beyond the hedge is the "gateway to the good life" where peculiar creatures called ... more...