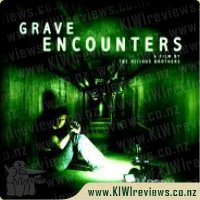 This is another in the long line of hand held camera movies. In Grave Encounters we follow a man who stars in a TV show where they visit haunted sites and try to capture real live ghost activity on camera. Our main guy, his camera crew and a medium from another TV show allow themselves to be locked up in an abandoned insane asylum overnight, yet you can see from the start that they think this is all a joke and naturally expect to find nothing at all.

This movie takes it slow at first, building the foundation, showing us people who almost scoff at the possibility of ghosts and that they expect that they shall need to make up all of the footage. Naturally, things go fine for a while, they find out who is supposed to haunt the building and what the history of the building is. As the night draws in, ghostly events begin to occur leading to terror and deaths.

I do feel that the hand held camera view in movies is very overdone at the moment, however I do like that this is a film crew, and that you see the movie poke a bit of fun at current reality haunted tv shows. However, I think that the start of it is the best part of it, the first 45 minutes where the nudges and jokes are made at reality TV. The horror scenes are pretty much the norm for any horror movie and it isn't hard to guess what is going to happen.

Not bad for a horror movie, but it's still nothing new, it's the same old basic script dusted off and a few bits cut and pasted in different orders, but it's all basically the same run down. Nothing fantastic but one of the better horror movies I've seen recently.