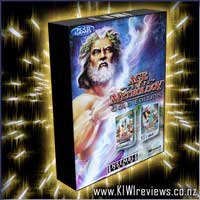 Age of Mythology Gold gives you the award-winning, original title as well as the recently released Age of Mythology: The Titans expansion pack. Travel back to an ancient world alive with greater detail than ever, and experience exciting new gameplay elements and characters.

FeaturesEpic Campaigns
Play in a 36-scenario, single-player campaign that allows players to take part in an epic mythological tale, inspired by a number of popular myths.

Multiplayer with up to 8 Players
Build civilizations, or play against others with easy-to-use multiplayer gaming online and single-player games against AI opponents through Ensemble Studios Online at http://www.eso.com/

OK, I'll keep this quick, because frankly, I could fill 100 screens if I start to get too detailed.

Excellent value for money. With the expansion pack giving you access to a whole vista of new playing options, you are really getting 2 games for the price of one. Now you can't ask for better than that. (Well, OK, you can, but let's face it, you probably won't get it. :) )

Not quite as demanding once you have played the original titles, since you already know the moves and it's just a case of tactics... so still right up there, but you probably won't get QUITE as hooked if you have already played any other "Age of ..." title.

Totally replayable, at least 12 times anyway, because you really will want to go right through all the civilisations and see just how much each of them can do. Each has an advantage, and disadvantage, in relation to the others, giving a whole new dynamic to each game. This is NOT another "Same Moves, Different Sprites" type game where it's a cosmetic change between civ's... each plays totally differently to the other 11.

Overall, I had a blast giving this game the full treatment. My only regret is that with all the other stuff to review, I probably won't get a chance to come back to this in a while. :(

But Heihachi will fight to the death...