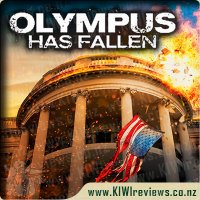 Disclosure StatementFULL DISCLOSURE: A number of units of this product have, at some time, been supplied to KIWIreviews by the company for the purposes of unbiased, independent reviews. No fee was accepted by KIWIreviews or the reviewers themselves - these are genuine, unpaid consumer reviews.
Available:
in cinemas from 18th April 2013

Disgraced former Presidential guard Mike Banning finds himself trapped inside the White House in the wake of a terrorist attack; using his inside knowledge, Banning works with national security to rescue the President from his kidnappers.

With more action in the first 10 minutes than most action movies have in their entirety, this is a movie you can't really look away from for more than a few seconds or you'll miss something!

In this movie we are presented with a hostile take-over scenario like no other I have come across, which is resolved in a manner we see all too often. It's this contrast that keeps the movie engaging for me. The predictability of the reactions to unpredictable actions keeps one guessing, and funnily enough, rooting for the bad guys here and there! Not from any sense of outrage or justification of their cause, but more because they clearly put in so much effort, to have it all taken down by ham-&-cheese antics from a buckaroo ex-Secret-Service guy who happens to find his way into the battle.

It did raise one big question for me... after 9/11 any form of aerial craft entering restricted airspace anywhere near a governmental facility in America is immediately suspect and usually dealt with in a far less diplomatic fashion then portrayed here. But a huge cargo craft flying straight towards the hub of Washington D.C. would be far more likely shot down while still over water after 2 ignored radio calls. But, forgiving that goof, the plausibility of the take-over actions leaves me wondering whether there would actually be a suitable defence against an attack laid out in that manner. Even ignoring some factual goofs - including the size of the White House lawn being smaller in this movie than in reality, such a take-over seems all too possible.

God help the rest of the planet if such a thing happens, because you just know that whatever hell is unleashed in the US is going to end up on our shores one way or another. Weather bringing toxic fallout, water pollution, eventual invasion with far superior firepower... that kind of thing. No fluffy bunnies or unicorns coming to save us in those situations!

However, in true Hollywood style the good guys win, after paying a horrendous toll in lives, the bad guys leave in body-bags, shopping bags, or under the impetus of a garden hose in some cases, I would imagine. And of course, our hero - Gerard Butler - saves the day single-handedly.

Having first really noticed Gerard Butler playing a fairly quiet role in "Timeline" - the movie adaptation of a sci-fi classic I loved to read, and then again in "Law Abiding Citizen" playing a 'brain' - a governmental operative whose sole purpose is to devise sneaky and nasty ways to make people fall over and stop breathing - he instantly became a favoured actor for me. I then saw him in "Gamer" and thought "this guy is the new Bruce Willis... with more grit and less puns." Now, any movie with him in a key role is one I will watch... except for "300" which I walked out of after 10 minutes.

Overall, this movie was actually quite good - with lots of action, a simple plot, some serious bad-guys you can really get behind and loath, and a hero who is uncomplicated and easy to engage with... it's certainly not a chic-flick or action-romance of anything... but you'll probably enjoy it if you liked any of his other stuff, or some of the "secret service" movies done by Harrison Ford.

In a divided land, it takes a rebellious boy and his clandestine love for a princess of an opposing race to stop a war orchestrated by a power hungry villain.

Delgo, an adventurous dreamer but naive teenager, must rally his group of troubled youth and some unlikely friends to protect their world from conflict between the terrestrial Lockni people, who harness the mysteries of the land. And the winged Nohrin people, who rule the ... more...