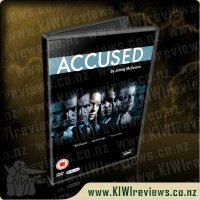 This multi-award winning drama is a gripping blend of true-to-life situations, moral dilemmas and intriguing characters.

Each story is about an ordinary person who ends up in the dock. But should these men and women be there? Are they innocent or guilty or somewhere in-between?

As each hour long episode unravels we see how these people became the accused and finally whether they walk free or go down...

I really enjoyed this TV show. Each episode stars a different person and we are told the story, from their point of view, as to what events happened to bring them in front of the courts.

The characters in this range from a family man who has everything go wrong at the same time, to a mother grieving the loss of her only child, a taxi driver who becomes enamoured with the wrong person, a father who wants to protect his child, a woman leaving her husband etc. The acting is superb and totally believable.

I really like the fact that weather they are guilty or not guilty, committed a crime or not, you're simply seeing things from their side. You get to see everything that brought them to that point and it keeps you guessing. You think one thing will be what they go to court for, only for it to turn out to be something else.

I was quite interested in watching this TV series. Accused is a crime show with a difference. Each hour long episode follows a different person (or persons as the case may be) and is done in such a way that each episode is a stand alone episode with no links to any other episode.

Each episode in Accused starts with the person awaiting trial and being led into the docks, no information at that time is given as to what their crime is, we may hear a little from the courts before we start back at what led our main person to this point.

There are bits of the present, our Accused in court, scattered through the episode, but the bulk of it is showing us all the events that led up to court date. We get to see every important detail that the person went through in the time leading up, and at the end of it we hear if they are guilty or not guilty and what their punishment is.

What I really enjoyed about this show was that there is none of the lab test, there's no police work (ie. it isn't the centre of the film), instead you get to see everything from the persons point of view, thus knowing at the end if they are guilty or not as well as finding out if they manage to get a guilty or not guilty plea.

The actors in this are superb and do a fantastic job. My only fault with this show was that the first four episodes felt like they took a lot longer than an hour, but, it found its footing and the following four episodes are much better paced. It's a nice change to the crime/drama genre and I would like to see the second season.

A compelling insight into the greatest man-made structure in the world, through the tales of three very different individuals who helped to forge a nation and create an icon, this is the human story of the Great Wall of China. More than 3000 miles in length, built in just 20 years by a workforce almost 2 million strong.