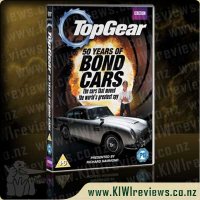 The cars that moved the world's greatest spy.

From the gorgeous, gadget-laden Aston Martin DB5 and aquatic Lotus Esprit to the gawky Citroen 2CV and spiral jumping AMC Hornet, Richard Hammond looks at the machines that moved the world's favourite spy and gets the styories behind them from Bond legends, including actors Daniel Craig and Sir Roger Moore, directors Guy Hamilton and Vic Armstrong, and producer Michael G. Wilson.

Inspired by on-screen Q Branch, Hammond also attempts a car gadget of his own with a home-made 'invisibility cloak' and takes a plucky, low budget stab at something even the Bond producers couldn't crack - building a fully working Lotus submarine.

Top Gear - 50 years of Bond cars... it's almost as exciting as an actual Bond film.

I have been a Bond fan since my earliest days, having grown up in a household already well-ensconced in the whole franchise. One of the first movies I can remember seeing on the TV, when I was finally allowed to stay up late enough to see it on live broadcast - this is WELL before recorded video media was common in the consumer marketplace - was Roger Moore in Moonraker. That just blew me away.

Once movies-at-home were available, via the all-new VHS cassettes, my parents quickly collected all of the James Bond movies to date, and I had the great pleasure of spending many weekend hours lost in the high-action world of 007 - gadgets, cars, boats, planes, rockets, strange conversations with women that had Mum & Dad sniggering but left me confused... ahh, the innocent days of youth!

I admit, I never was, and still am not, much of a petrol-head, so the cars never really impressed me as much as the gadget Q Branch built into them, but to this day I can still admire the beauty and style of the cars - all examples of the fashions and attitudes of the day. Richard Hammond brings them all to life again, and gives so much extra information, in this exciting but all too brief 62 minute disc.

Overall, a great addition to any Bond and/or Top Gear fan's library. With the interviews, the history, anecdotes and revealing some funny bloopers that have me rewatching all 23 Bond films again just so I can see them myself... it's brilliant! Add to that Hammond's almost signature 'Let's bodge up something fun" bits - in this case, a (mostly) functional Lotus Esprit submersible - and you have a great way to pass an hour!

All this and more is answered as the relationship between a stand-up comedian and his informercial-loving girlfriend gets put under the spotlight.