« Its a wonderful afterlife review 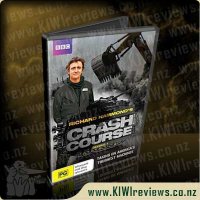 Disclosure StatementFULL DISCLOSURE: A number of units of this product have, at some time, been supplied to KIWIreviews by the company for the purposes of unbiased, independent reviews. No fee was accepted by KIWIreviews or the reviewers themselves - these are genuine, unpaid consumer reviews.
Available:
February 2013

Top Gear star Richard Hammond travels across the US for his ultimate motor challenge, seeking out and driving the country's toughest and most extraordinary vehicles. These awesomely powerful machines have very specific jobs to do - and operating them is no easy feat, even for a confirmed motor nut like Hammond!

No two are the same, so before getting behind the wheel, joystick or control panel of these outlandish vehicles Hammond is taught how to handle them by the people who operate them on a daily basis. Over the series he trains with firefighters for his encounter with the supercharged Striker fire engine, learns to fire and manoeuvre the mighty Abrams M1A1 tank, heads for logging country to master the tree-devouring danglehead processor and conquers huge specialist cranes on demolition sites and oil rig salvage barges.

Never did think much of Richard Hammond in Top Gear - he just seemed such a wet noodle compared to Jeremy Clarkson, however once I saw his "Blast Lab" series I got a new appreciation for him. In this series, he takes a hands-on look at some of the big machines that do the behind-the-scenes jobs people take for granted - fighting fires, harvesting trees, dealing with out waste, recycling, and defending the country.

Though it's clear to see that most of the 'impromptu' scenes have been carefully scripted, there are a few surprises that pop up here and there, keeping things interesting. Of the six episodes though, I think the one that would have to be my favourite is episode 4 - the Striker firefighting truck. Longer than a 4-storey building is tall, weighing in seriously heavy, able to run off-road, agile enough to run an obstacle course and able to be driven and operated by a single trained driver... whooo-eeee! I would love me one of them!

Richard Hammond has driven some of the fastest land vehicles on the planet, and is a capable flier as well... but this series really did seem to put him way out of his comfort zone, and yet he still manages to keep it light and entertaining, while still making it educational. Though it is American-based, you would be surprised how many of the machines he learns and operates in this series are actually in use here in NZ as well. It gives you a good appreciation of what is happening in places most of us choose not to look. And most importantly, it gives an appreciation of the hard work some people go to behind our backs, to make our lives not only easier, but possible!

Overall, a great series, and I see that a second series has already been made. I look forward to seeing that come out on DVD so I can get that too... though if what I read is correct, it's a little less 'practical' based, which may make it more accessible to some, and less so for others. Be interesting to see what it's like...

Follow the now 8-year-old Angelina Ballerina as she puts her best foot forward and embarks on the next stage in her life.

Angelina enrols at Camembert Academy, a school for the performing arts where she meets new friends and experiences an exciting world of dance, music and performance.