« Charlie and the Chocolate Factory review 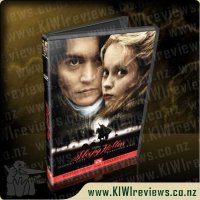 It is the year 1799 and in the isolated hamlet of Sleepy Hollow, murder most foul has occurred. Who or what is responsible for the corpses? - each killed instantly - all decapitated.

The visiting constable, Ichabod Crane (Depp) suspects one of the villagers is responsible but Sleepy Hollow locals believe the killer is not one of their own and most definitely not of this world.

Tim Burton's Sleepy Hollow, loosely based on Washington Irving's classic story, is neither sleepy nor hollow, but it isn't the most exciting movie to come out either.

The film is set in 1799 where the little town of Sleepy Hollow has been plagued the presence of a headless horseman who goes out decapitating heads. There is a pattern to his madness and it is up to Ichabod Crane (Johnny Depp), a would-be detective with a mindset firmly rooted in analytical methods, to discover it. At first, Crane scoffs at the possibility of the supernatural causing the deaths, but as he becomes entangled in a web of intrigue and mysticism involving the Van Tassel and Van Brunt families, he realises the sinister nature of the beheadings.

The plot finally leads to a confrontation between the pitiful Headless Horseman - a former Hessian soldier who was beheaded but now summoned by witchcraft for nefarious purposes - and Crane, and it is a bit too conventional. The chemistry/tension between Crane and Katrina Van Tassel (Christina Ricci) is close to absent and in general there is very little character development, though the actors (especially the supporting cast) present fine performances.

The cinematography, set design, and special effects, in my mind, is what makes Sleepy Hollow worthwhile to watch. It is bleak, dark, and very typical of Tim Burton's previous work, and it is excellently done. There are some scary moments and there is enough gore to frighten and disgust. The pacing is decent enough to keep you awake. The strength of the supporting cast leads to an extremely convincing setting for the film, where the moody atmosphere reaches out from the screen and takes a hold of you. Ultimately Sleepy Hollow is a fairly conventional horror movie which looks extremely good and sounds even better, thanks to a great score by Danny Elfman.

I have to say that I watched Sleepy Hollow when I was in an extremely distracted frame of mind, but yet it held my attention enough to follow it. At a minimum, I think that makes a movie worth watching.

I'm not a huge fan of horror, and when we got this out at the video store, I was really not keen to see it. I do enjoy watching Johnny Depp. I don't swoon over him, but I think he is a good actor and he often challenges himself with complicated characters. So I knew his performance was going to be good no matter how the rest of the film played out.

I was also interested to see how Christina Ricci was going to be. I hadn't seen her in anything since the Addams Family. Of course this made her feel a little one trick pony, being in yet another dark gothic style horror, only this time no comedy.

The story of Sleepy Hollow is a well known American Legend. It has been covered in various television shows I have watched, so I knew what to expect. Being directed by Tim Burton, it didn't surprise me that he put his own spin on the story and on the main characters. I also wasn't too surprised at the level of gore. I think I spent quite a lot of my time behind a pillow cowering!

Overall, it was a good quality horror film. If you love Burton and Depp projects then, you'll probably love this. For me, it was just a bit too scary and I couldn't relax and enjoy it the way I would another genre. That doesn't make it a failure though.

In 1979 young Donna, Tanya and Rosie graduate from Oxford University - leaving Donna free to embark on a series of adventures throughout Europe. On her journeys, she makes the acquaintances of Harry, Bill and Sam - the latter whom she falls in love with, but he's also the man who breaks her heart.

In the present day, Donna's pregnant daughter, Sophie, dreams of renovating a taverna while reuniting with her mother's old friends and boyfriends on the Greek island of Kalokairi.