« James and the Giant Peach review 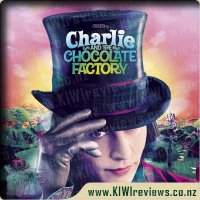 Long isolated from his own family, Wonka launches a worldwide contest to select an heir to his candy empire. Five lucky children, including Charlie, draw Golden Tickets from Wonka chocolate bars and win a guided tour of the legendary candy-making facility that no outsider has seen in 15 years. Dazzled by one amazing sight after another, Charlie is drawn into Wonka's fantastic world in this astonishing and enduring story.

I did want to see this when it first came out as a movie but had a few people tell me not to watch it if I liked the original as Johhny Depp ruined the movie so I gave it a miss, I had a turn to pick the family movie tonight and this one caught my attention as I do enjoy the story.

I'm not sure whether to like the movie or not, I was watching it thinking that they have left some of the important bits out, they didn't sign the agreements like they did in the original movie and I did miss the oompa lumpas but did kind of get used to these ones. I'm glad to say that they didn't change the story too much, was weird to see Willy Wonka having flash backs so you kind of understand his story a bit more.

I think the actors played their parts well, whether they were greedy or bossy or just plain annoying. The special effects were amazing, kids loved the idea of a chocolate lake and waterfall. My 7 year old has told me that he loves the movie and has put in a request for me to buy it for him.

Charlie and the chocolate factory; you know the story, find a golden ticket and win a tour through the chocolate factory. The story is based around a young boy from a less than well to do family, who finds one of the tickets. II have read the book, watched the movie starring Gene Wilder, so when it was re released starring Johnny Depp, I had to see it.

I love Johnny Depp, and generally in most of his movie and TV appearances I think he is amazing. But I have to say I was not overly impressed with his portrayal of Willy Wonka. I much preferred Gene Wilder. I understand that Willy Wonka is supposed to be this weird eccentric character, but I felt that Johnny Depps performance was to eccentric. It annoyed me and came across as weird.

However that is my only complaint, all in all I really enjoyed the movie. Full of wonderment and mystery. Some of the child characters and their parents easily rub you up the wrong way and you can not help but have a wee laugh at them when their selfish, rude, disrespectful ways are punished lol a good message in those scenes. Not my favorite movie but one I can watch again if I have to.

I heard a little rumour about this remake first, and was cautious but curious. When I heard it was Johnny Depp and Tim Burton I heaved a sigh of relief as there isn't a film that those two have made together so far that I haven't thoroughly enjoyed.

I grew up watching the original Gene Wilder version, so there was always going to be the risk of comparing the two to the other, but within the first five minutes I was well and truly into this film and the first version didn't enter my mind once. I have been told (having not read the books) that this was darker like the book and used the original lyrics from the Oompa-Loompa's songs.

I really enjoyed some of the special effects in this film, all the extra rooms that we see in the factory, the glass elevator and of course the room made entirely of candy (only in my dreams -sigh- ) The acting was superb. Freddie Highmore performed excellently in this movie, at times out-acting those who have been in the business for years.

Whilst comparison is inevitable, if you have seen both, I still suggest that you watch this and try not to think of the original as both versions are delightful in their own way. Johnny Depp is brilliant in this, and I love to watch this time and time again.

I know and love the Gene Wilder version of Charlie and the Chocolate factory so well that it is impossible to watch the Johnny Depp version without comparing the two. Someone that had never seen the original movie would probably have a totally different perception of the later version.

As to be expected from Tim Burton as the director, Willy Wonka's is a very creepy character, one that most parents wouldn't want their child to be around. Burton also utilises modern technology and has cloned, using computer graphic imaging, a single oompaloompa to make a whole army. I find this to be both clever and odd. The classic songs from the first movie weren't there either.

Johnny Depp is hardly recognisable as Willy Wonka thanks to his great acting and fabulous make up. He is such a diverse actor. They needed to have a strong actor in the role and he does a great job. The young boy that plays Charlie is very convincing as a poor timid lad.

I feel this version wasn't as true to Roald Dahl's book but is still a movie that kids will enjoy. Those that haven't seen the original won't be as disappointed as us oldies.

Now displaying a greater confidence in his own power, Neo fully realizes that he is a superhuman ... more...