The Chronicles of Life and Death review 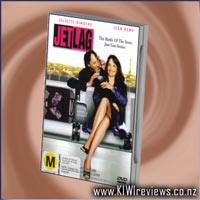 Disclosure StatementFULL DISCLOSURE: A number of units of this product have, at some time, been supplied to KIWIreviews by the company for the purposes of unbiased, independent reviews. No fee was accepted by KIWIreviews or the reviewers themselves - these are genuine, unpaid consumer reviews.
Available:
7th Oct 2004

When an airline strike grounds these total strangers together in Paris - and they're forced to share the last available hotel room in town - neither can wait to leave the other behind.

But the more they try to go their separate ways, the more obvious it becomes that there's no place they'd rather be.

First off, it was obvious that the actors were speaking in French, but after about 10 minutes you stop noticing it much. If you just hit the 'play' button you end up with French soundtrack and English subtitles on by default... so a few quick presses of the remote, and bingo that's fixed.

The story, well, it is a series of comic disasters and misunderstandings, with quite a bit of almost-romance thrown in. By halfway through the movie these two 'strangers' are acting like a couple who have been married for about 5 years... bickering, reconciling, miscommunicating, etc. But it's done in the best possible taste. :)

I can't really comment on the movie too much, without giving key elements away, but I can say that if you have seen Jean Reno in 'The Professional' this is a major change of pace... which he pulls off well. Very well. Not much chance of this guy getting typecast anytime soon. :)

Overall, a funny movie indeed. A good, hearty romantic comedy, that would probably appeal to the romantic set more than it did for me. I enjoyed it, but because it really isn't my thing (despite totally enjoying 'A Bed of Roses' with Christian Slater) I found it to be a view-once movie.

A reimagining of the classic horror tale about Carrie White, a shy girl outcast by her peers and sheltered by her deeply religious mother, who unleashes telekinetic terror on her small town after being pushed too far at her senior prom.