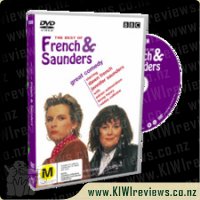 A compilation of all the best bits from French & Saunders. Including: Bros Star Test, Popular Classics - I Should Be So Lucky, The Day In The Life Of A Ballerina & The School Trip.

Hancock's Half Hour - Volume One
Rating: 9.5

When I was a lot younger, I was desperate to be a comedy writer for the BBC. With that in mind, my heroes were those alternative comedians working at the Beeb through the 80s and 90s. Dawn French and Jennifer Saunders, while a wee bit less funny than the fellas, were still my heroes. Ladies I watched to learn what I could.

This DVD was a short compilation of various sketches. At the time, I purchased it on VHS. It was what the BBC was releasing and I had quite the collection of different compilations including the best bits of Red Dwarf and the Young Ones. One annoyance for me, was that you couldn't really source a whole series at the time. Also more often than not, you could come up with a better compilation given the time, videos and editing equipment.

Still, I always loved the sketches where they play the naughty school girls. And there is a bit of that in here. I think they really capture what young teenagers can be like and how they interact. That kind of 'fake it til you make it' confidence. The rest of the sketches reveal some of their talent, in cross-dressing and their skills at song and dance. Even though they often go overboard, those girls are really very talented. I just wish there was more.

The West family, their friends and associates laughed, cried, loved, drank and swore their way into the hearts of audiences at home and around the world.