« Murder on the Train review 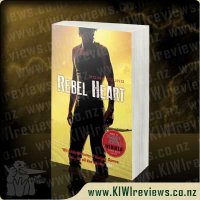 Danger. Betrayal. Destiny. Passion. Saba has rescued her kidnapped brother and defeated the fanatical Tonton. But the price to be paid for her violent victory is terible. Jack has disappeared - and can no longer be trusted.

A new and formidable enemy is on the rise in the dustlands. No one is safe. And Saba must confront the terrible secret hidden in the darkest depths of her soul.

They call her the Angel of Death. She defeated a tyrant, but victory has come at a cost. Haunted by the ghosts of her past, she needs Jack. His moonlit eyes, his reckless courage, his wild heart. But Jack has left, and the ruthless new enemy searches for Saba across the Dustlands...what a way to get the reader drawn in and attracted to the book. By what I read on the back cover definitely left me wanting more.

I hate reading a sequel without first reading the book before the sequel...in this case I didn't have much of a choice but after reading Rebel Heart it left me wanting to read the first book in the series by Moira Young because it left me with only half the story and throughout reading Rebel Heart the pieces of the puzzle just weren't fitting together for me and I felt as though I was missing integral parts of the story!! The book wasn't making full sense to me.

Once I started reading the book I found it hard to put down as I was instantly drawn into the drama that the characters were living. When I wasn't reading the book I found myself thinking about the book, thinking about the characters, what situation would they find themselves in next, would they all survive the next battle against the Tonton, would Saba find Jack etc. the book was the first thing I thought about in the morning and I read as much as I could before leaving or work then I took the book to work with me and on my breaks would read as much as I could, and I would stay awake as long as my eyes would stay open at night.

I wasn't sure what to focus on in the book...the romantic side, the love triangles, the action side with all the fighting and killing scenes, the very real scenario of Saba's post traumatic stress and nightmares of what happened in the first book (that I haven't read, but the dreams all focus on what must have happened in the first book I assume), the bickering between brother and sister, trying to figure out if Saba was a strong independent woman or one that is nothing without the love of a man. So much going on and by not having the full picture it was hard for me to understand.

Moira Young has made me a fan of this series of books however and now I can't wait to read the other books, to read what happened in the first book and then in the third, I need to know what happens to the characters, do they live happily ever after...is DeMalo still alive after the attack at the resurrection? What does Tommo do after seeing Saba and Jack together. Rebel Heart has left me with more questions than answers so bring on the first book and the next book in the series...I can't wait!!

To say I was able to read this in one sitting would not be pushing it, I could not put the book down. I enjoy books like this, yes they are aimed at kids (mainly) but for an adult that likes this kind of thing it was great. The story is very easy to believe as are the characters and I could feel myself getting involved in their story. I never wanted it to end and was gutted when i got to the last page.

This is book two of three (I am not sure if there will be more). The story is set in the future, where Saba has lived her whole life in Silverlake. to us it might sound nice but in reality it is a dried-up wasteland ravaged by never ending sandstorms. She has rescued her twin brother Lugh, and now her, her family and friends travel west for a better life. She meets up with the man she loves (Jack) and she wonders just how far she can trust him, plus there is a little love triangle for her to cope with.

I enjoyed this sooooooo much, I am now going to try and source the first and third books so I can read all of them. Moira Young's writing is such an easy style, it would be able to be read by any teen or adult, the story is real and comes to life in your mind. I would recommend it to anyone.

Tom Leyton, a reclusive Vietnam veteran, has been the subject of rumour and gossip for thirty years. When Joseph Davidson, his young neighbour and a talented artist, is asked to draw a portrait of him, an uneasy relationship begins to unfold, one that will force each of them to confront his darkest secrets.

This is a story about how we perceive others, the judgements we make about them, how we cope with tragedy and the nature of miracles.