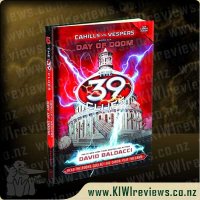 The 39 Clues - Cahills vs Vespers 6 : Day of Doom product reviews

But when they deliver the last ransom, Amy and Dan discover Vesper One's terrifying endgame. The objects he demanded are vital pieces in a Vesper plot that will harm millions of innocent people. Now the two siblings and their friends are in an all-out sprint to stop Vesper One... before the whole world goes BOOM.

Wow the new addition to the series of the 39 clues is finally here! This new book is the climax of the Cahills Vs Vespers series. It has a great deal of physics and such. The famous Archimedes has been rebuilt, and called upon to destroy Chicago! This book is full of excitement that once open I couldn't stop reading it until I had finished. The cover shows the effects of the doomsday device and it is very detailed and "doomsday-ish".

The code was unique but it wasn't actually too hard. The code has a mysterious feel about it and may hint at what the next book/s may be about. The code on the front cover however was a bit harder to crack and harder to see. The secret name is definitely interesting and I wonder if it means anything. I haven't got around to playing the mission yet but it seems to be an explosive new addition to the website. The amount of science in the book is staggering. In this book the doomsday device and Gideon Cahill's serum are revealed and it is packed full of excitement and surprises just as I thought the series was getting too predictable. The science in the book is mainly focused on the subduction zones and the earth's magnetic zones.

The identity of Vesper One is finally unmasked during this epic conclusion of the series. Although there were a few clues in the codes scattered in the series, its great to know his true identity. It was a mystery that has had me baffled for ages. I like the way the cards in the card packs and the beginning cards in each book together make a map of the zodiac and what I think is the doomsday machine.

The book is at an affordable price, great value and all in all it is still a great finishing book of the series.

Holy mother of quantum physics, I was beginning to feel the storyline of the series start to die down, but this book has brought it back up, WITH INTEREST!!!! Out of all the books, this is the most explosive, I was on the edge of my seat for the whole book. I loved the cover, it had that whole "doomsday" feel to it, and the lightning destroys the 39 Clues logo, like it was destroyed at the end of the original series.

The hidden code was awesome, it was done in a type of code that I have never solved before, but the actual solving was quite fun. The book was full of scientific facts regarding the activation of Archimedes' doomsday device, for instance: the story mentioned the sky changing colour, the initiation of the device could have affected the air in the upper atmosphere and therefore which part of the light spectrum got through. The dose of science in this book made the story even more enjoyable, considering that science and sci-fi are things I love.

I was excited to learn the identity of Vesper 1, It was a mystery that has eluded me since the beginning of this series, there were quite a few mysteries that this book and book 5 have revealed the answers to some other mysteries that I have been confused over, but now my curiosity is gone and replaced with a fresh, new batch as I wonder what will happen in the next series: Unstoppable, coming later this year...

The price is good, it is nice and cheap but not too cheap, so now almost anyone can afford to buy this new and explosive book, but I might take my time in rereading this book though, it's not so good that I will want to read it a thousand times over before the end of next month, but it is not so bad that I never want to read it again. All things considered, well done David Baldacci, you have written one hell of a story!

Whilst relaxing on the beach in Brunei as guests of the Sultan, Dreamland's Breanna and Zen are shot at, and forced to take cover in the water by unknown assailants.

Dreamland are training the Sultan's air force, instructing them on the newest and best aviation technology. But there are those not happy with this alliance.

Suddenly Brunei is under attack from terrorists, and someone somewhere is getting ready for the ... more...